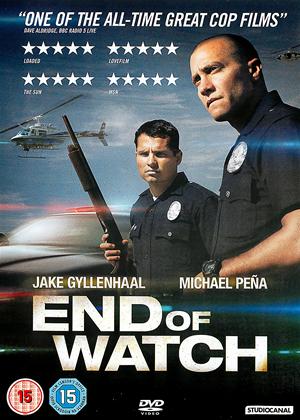 Reviews (3) of End of Watch

This film is definitely way at the end of the scale for me in terms of violence, some graphic scenes, sexual references and swearing... However the friendship between the two leads and their scenes in the car kept us watching - it's clear that much of the dialogue is improvised and the affection between the two has developed over the preproduction rehearsal, and the natural affinity and brotherly bond is engaging and feels very authentic. That's the upside. The actual narrative is less than overwhelming, despite it clearly being around a topic of great importance to the filmmaker, and it's not a film I'd recommend to many friends simply because of the tone being so extremely violent and offensive. But it's hard to make a movie about people-trafficking and drugs which is PG rated, so if you're up for that sort of thing, you'll be fine. As a big Gyllenhaal fan, I wasn't disappointed - he is great and there's lots of un and and good lines in here. It consistently felt like a very long pilot for a buddy cop show, and if it got made, then I'd definitely watch. As a feature length film, maybe not Oscar material.

So-so police action movie - one for the fans, though. - End of Watch review by PV

This is the sort of movie that would appeal to off-duty plods and woodentops in the UK, fantasising about doing interesting police work on their days off watching DVDs (instead of their usual arresting of drunks, druggies, shoplifters and those who say bad words on Facebook and emails - well, easy meat boosts arrest targets eh?)

For me, this was pretty boring - though I can appreciate the immediacy the director was aiming for with the hand-held camera and police car camera stuff, all from the convenient fact that one cop is filming a documentary (though we are never told why).

There is a constant attempt to add empathy to the two main characters, to humanise them, and thus build up to the finale. Sadly, for me, I still didn't care much about them as characters, so was unmoved by what happened to them; and certainly I didn't believe the Mexican drug cartel plot shoehorned into the plot to raise the stakes. That balances the 'good' hispanics we see who are cops.

Lots of shooting, drug crime and murders, for people who like that sort of thing.

3 stars - just - because it is well-made. But really, one for the Americans and off-duty plods fantasising about being cool LAPD cops.

The movie may have been called "End of Watch" but I didn't "Watch until End" after 40 minutes it was hit the stop button before becoming comatose with boredom. I don't know what it is with movie maker which insist in churning out movies where the storyline has to include the actors filming themselves for some reason, because its old news, repetitive and quite frankly naff. Whatever happened to the like of 'Dirty Harry', 'Magnum Force' or movies of the like where the coppers were hardnosed and the movie was about them getting the murdering psycho's?

As for this movie, for me this was my "End of Watch" where it is concerned......