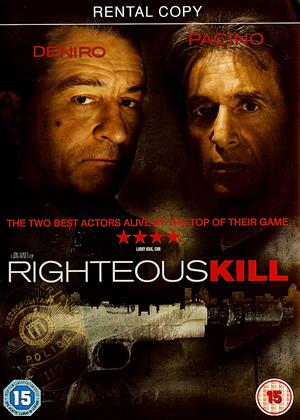 Synopsis:
The legendary pairing of academy Award winners Robert DeNeiro and Al Pacino is in full force in Righteous Kill. Turk and Rooster are two veteran cops on the verge of retirement, when one last job finds them on the trail of an apparent vigilante serial killer who they thought they’d put away years before. It’s a race against time to catch the culprit before they strike again. But as the net closes in, the force begins to suspect their quarry may be one of their own. When even the Good Guys don’t know who they can trust, the treacherous game of cat and mouse starts to unravel startling truths.
Actors:
Robert De Niro, Al Pacino, Carla Gugino, 50 Cent, John Leguizamo, Donnie Wahlberg, Brian Dennehy, Trilby Glover, Saidah Arrika Ekulona, Alan Rosenberg, Sterling K. Brown, Barry Primus, Melissa Leo, Alan Blumenfeld, Oleg Taktarov, Shirly Brener, Frank John Hughes, Terry Serpico, Liza Colón-Zayas, Malachy McCourt
Directors:
Jon Avnet
Writers:
Russell Gewirtz
Studio:
Lionsgate Films
Genres:
Drama, Thrillers

Righteous Kill is one of those films that a lot of people have just been looking forward too because it has two of the greatest actors of our generation, Robert DeNiro and Al Pacino. I must add how I love in a lot of the TV ad's they're saying this is their first film together, true, it's the first time they are real co-stars together, but they've had two films already. Anyways, back onto the film, Robert and Al are both incredible actors, we know that, Robert is actually my favorite actor, so naturally I was looking forward to seeing this movie, I hate to say this, oh, man, I hate to say this, but this film was an utter disappointment. I'm not saying this was a bad movie, but this was a sad and very predictable thriller that could have been done with more average actors, Al and Robert are above this script and don't pull in their best performances due to that. The story is very mediocre compared to some of these terrific actors who looked so bored throughout the move.

Turk and Rooster are partners on the police force, having experienced over 30 years of constant bad guys going free, seeing the innocent's blood shed, and all the injustice in the world, they've almost lost it. Suddenly, there are murders involving the criminals they have arrested, along with younger officers, they try to figure out what is going on, but when one of the cops brings up that it might be a vigilante situation, Turk and Rooster are hesitant. Maybe they're hiding some secrets of their own.

Righteous Kill, don't get me wrong, it's worth the look, especially to see these cinematic legends on screen together, but like I said, for the script they were given, this was way too average and they are above it. I even hate to say it, this was very predictable if you've seen a lot of these thriller movies of today. Not to mention, I think Al Pacino, this must have been his third movie where he has worn that same leather jacket, I mean is it just me, or does anyone else notice this? Over all, it's not a bad movie, but it could have just been done with average actors, instead of all the hype that has been around it because of the actors. Just don't be fooled, it's a typical thriller, nothing special, I suggest waiting for the rental.

Sorry to say (as I love both of the stars) that this was a major let down. Formulaic and dull, predictable and by the numbers. Filled an evening, but left me wanting so much more.

Al Pacino's acting has waned. It is as if he has been prised out of retirement. De Niro is considerably better but still way past his peak. The first half of the film is poor mainly because of poor acting, the plot drags the second half up to bearable.

Just like Taken featuring Liam Neeson, Righteous Kill features it's own heavyweight actors that elevate the film to a status that it doesn't warrant. The expectation of seeing De Niro and Pacino together on screen again, is rightly high but Righteous Kill is not the epic stage they deserve. This is a predictable cop tale that would have gone straight to DVD without the two lead actors, I'm surprised that they chose this script in which to reunite. Pedestrian directing and a lacklustre tale will have you wishing they shouldn't have bothered.