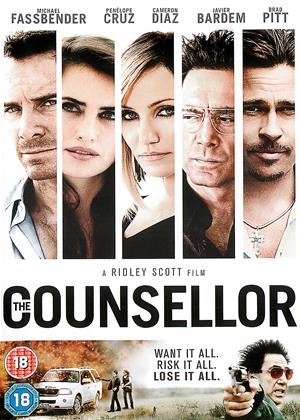 Reviews (5) of The Counsellor

Icky and confusing - The Counsellor review by CP Customer

About half way through this film, I was completely confused as to what was going on. No idea as to which way was up or who was doing what to whom and who was paying. This is probably why I wasn't so bothered by the violent content as I might have been, right up until the discussions of the snuff movies and the decapitation of Brad Pitt. Anton Chekhov wrote about the pistol rule; that if you mention a pistol, or just show one knocking about in the first act, it has to be used by the third. Javier Bardem describes the mechanism, a sort of automatic bola that cuts through the neck and cannot be stopped, to Fassbender in the first act, and sure enough, that's what does for Mr Pitt, and the tips of his fingers. Then Mr Fassbener has to contemplate the snuff movie of his lover which is sent to him

This film, although slickly and coolly produced, and if you will excuse the expression, executed, didn't cut it (tee hee again) enough to justify the grisly parts. I actually went to IMDB to check out the synopsis but this didn't make the experience any better, and I would now like to forget the whole thing.

A slick disappointment - The Counsellor review by CP Customer

Ridley Scott, you can do so much better! A film full of stars and a sense of self-congratulation.. But not well-deserved in my view. The grim end to Mr Pitt seemed absurd. It was hard to feel anything about any of the characters including the protagonist who appeared utterly one-dimensional. The normally skilled actors hammed it up for all they were worth, and the 'meaningful' monologues were..not! I initially didn't know what was going on - and later I simply didn't care.

As soon as this film finished I wanted to watch it all again - and I thought about it for the rest of the day, and the next day... This may be because the plot is a tad confusing - but then, so was that in The Usual Suspects... But really, I'd like to get to grips with the plot from early on this time.

If you have ever thought of taking cocaine, watch this movie and see how it gets out of Colombia to reach the US and Europe.

This is a well-written, well-acted, well-made thriller - very slick and ultra violent in a grand guignol way. I knew when certain gruesome things were mentioned in 'plants' early in the film we'd see them later on, and sure enough, we did!

Not the best thriller ever - but very watchable. As I said, I'd like to watch it all again now.

Awful - The Counsellor review by cs

given the names involved with this film I'm not sure how it ended up such a travesty...but it did! Really would recommend not bothering...it's confused, confusing, and Cameron Diaz is simply not a strong enough actress to make her character work. Very disappointing!

The plot comes from a novel by Cormac McCarthy and in essence it should have been a good production, but it wasn't.

In the film, the story line is quite hard to follow. There is no sensible introduction, other than a lewd sex scene with no context or relevance. There is a denouement at which certain things become clear, but in the highjack of the drugs shipment it is difficult to understand whose operatives are at work, and what is the arrangement if any between the character played by Brad Pitt and anybody else.