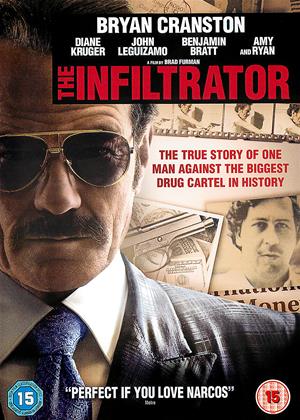 Reviews (2) of The Infiltrator

Recommend - The Infiltrator review by RM

An enjoyable film which is very interesting due to its connection to real events. Could go deeper but probably doesn't so the plot can keep moving on.

Infiltrating the Medellin drug cartel in 1980s America: an excellent movie - The Infiltrator review by Philip in Paradiso

During the 1980s, US Customs Service special agent Robert Mazur, as 'Bob Musella', offers to launder the dirty cash of a Colombian drugs syndicate, as he poses as a banker/ financial adviser. B Musella infiltrates the Medellin cartel, and helps expose the money-laundering organization of drug lord Pablo Escobar. In so doing, he also exposes the activities of BCCI, the international bank.

The film is very interesting for a range of reasons. First of all, all the events described are based on what actually happened, and it is quite remarkable. Second, the story is told very well. The sense of tension is almost unbearable at times, as extreme violence can erupt at any time, in the company of Colombian criminals who seem unpredictable and demented and are, ultimately, cold-blooded killers.

Incidentally, it was R Mazur's investigation that led to the complete collapse of BCCI, in the USA but also in the UK and in other countries where it operated.

It is an excellent film.

A throbbing segment of pulsating dangers that never quite leaves the viewer alone: The Infiltrator’s thrilling parts succeed where most features of the similar caliber don’t. On a completely different level, The Infiltrator also presents itself as great characters study regarding the ‘mole’ within Pablo Escobar’s crime empire. Will he double-cross his newly acquainted gangster friends, or develop new relationships among them which will make him forget why he ever came to know them in the first place? Two very different outcomes completely dependent on Robert Mazur’s mental fortitude alone.

Where The Infiltrator lacks in action, it most certainly makes up in character(s). Meet Robert Mazur, an undercover CIA double-agent who infiltrates drug lord Escobar’s ranks and befriends the criminals there in order to bring down the structure from within. It’s a daunting task indeed, which involves not only risking one’s own life – but the lives of countless colleagues, friends and family in the case of getting exposed for who Mazur really is.

A psychological nailbiter, sort to speak.

And then Bryan Cranston crashes the scene, carrying his talents all the way from Breaking Bad onward, and employing them here smoothly and seamlessly. It can almost be felt that his sole presence carries the movie’s momentum forward and makes up for other areas where The Infiltrator falls flat.

One strike for example is, the pacing drags quite a bit and at moments it feels like one’s watching a made-for-TV re-enactment instead of a full-fledged cinema experience. This is especially true when a scene that’s supposed to ooze suspense, ends up being your typical run-of-the-mill clichéd filler. Moreover, the timeline is not clearly defined as to what event happens in what time of history: it somewhat distracts from the overall experience, but nothing that’ll critically and completely break off a previously established immersion.

Fortunately, the negative criticism ends as quickly as it begins, since Brad Furman knows how to handle the camera – most of the time. Camera shots feel professional and planned, while cinematography and sound are somewhat present, but forgettable. Overall, The Infiltrator’s technical aspects fall in second place – while the screenplay is king.

And how it could not be, since it’s mostly based on Mazur’s own book (with a rather extensive title), adapted by scribe Ellen Sue Brown in close supervision by Brad Furman. It captures 1980’s era so efficiently that it’s as if you’re really there, present and conversing with its characters.

Finally, The Infiltrator starring Bryan Cranston, John Leguizamo, Diane Kruger, Daniel Mays and others survives thanks to Cranston’s own poignant performance, which more often than not, packs more potential than it actually in the end delivers.