Rent The Horror of Frankenstein (1970) 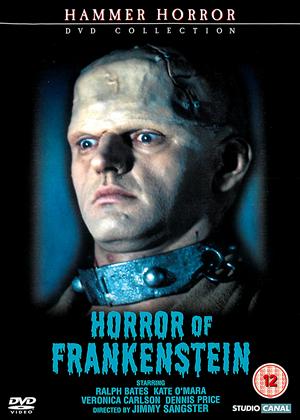 Reviews (1) of The Horror of Frankenstein

Spoilers follow ... - The Horror of Frankenstein review by NP

I have for years bored people rigid with my belief that some of Hammer’s most interesting films came during the last few years of their existence as purveyors of horror, as they attempted to boost their fading market. This lead to experimentation, which worked beautifully with some of their output. As always, there were exceptions – and this curio is one.

Peter Cushing, apparently now too old to play the Baron, is superseded by Ralph Bates in a bid to bring sex appeal to the role of Frankenstein. He is surrounded by a bevy of beautiful young women, including Elizabeth (Veronica Carlson) and Alys (Kate O’Mara). Bates is always enjoyable and nicely intense, although inevitable comparisons with ‘how Cushing would have done it’, would never be kind – after all, Bates is playing a philanderer, a young stud. A different take on the Baron.

The resultant story is not that different from ‘Scars of Dracula’, with which it was released, and which also disappointed at the box office. If anything, ‘Scars’ went further into later ‘Carry On’ territory than this – at least there are a few amusing asides here other than skin-flick slapstick.

Dave Prowse’s lumbering, bald-headed creature has a hulking effectiveness about him. The sound of his heavy, chain-crunching footsteps presses at least a few of the required horror buttons, although he is entirely devoid of any personality. Whenever he appears, Malcolm Williamson’s soundtrack echoes H.J. Salter’s music heralding Lon Chaney’s monster in 1942’s ‘Ghost of Frankenstein’ from Universal.

The story itself shadows that of the 1958 Hammer original in a sedate style. This isn’t a bad film (although the budget limitations are as obvious here as many Hammer films from this period), just rather under-whelming. As if aware of this, director (and co-writer) Jimmy Sangster seems deliberately to end the story in the most downbeat way possible.