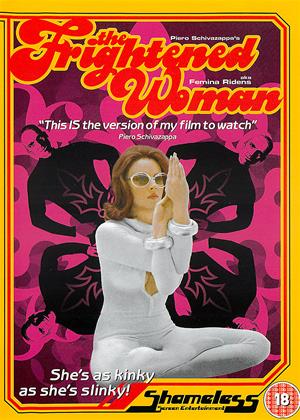 Reviews (1) of The Frightened Woman

Phillippe Leroy plays Dr Sayer, a rich sadist who enjoys degrading and torturing women for kicks. Leroy bears a slight resemblance to latter-day James Bond actor Daniel Craig, which is interesting. Dagmar Lassander is Maria, a journalist who becomes the latest in a long line of females who are subjected to the exploration of Sayer’s virility.

This film has been compared to the works of prolific Spanish director Jess Franco, who specialised in low-budget exploitation. For a story about a sexual sadist, ‘The Laughing Woman’ is ultimately rather mannered, comparatively speaking; we must not forget of course, that Franco was – with all due respect – a joyous pervert. Piero Schivazappa (who co-wrote as well as directed this) seems, by contrast, to be accentuating the trippy, psychedelic wackiness of his story as opposed to the sexually gratuitous, despite a couple of stand-out scenes. One of these scenes involves Sayer, who seems to be getting some roadside relief, spying a passing train resplendent with flapping pink flags, packed with attractive young women blowing suggestively on saxophones. Another involves Sayer disappearing inside a huge polystyrene vagina, outsized legs either side of him.

The ending may not come as a complete surprise to the audience, but it does have a certain sense of satisfaction about it. Getting to that point though, after 108 minutes, is far too long a time for such a thin story. It emerges as a sexually orientated episode of latter-day ‘The Avengers’ (the 1961-69 version starring Patrick Magee), but with no real sense of heart, despite the fine performances. Jess Franco films, to mention him one more time, always had a sense of improvised danger, a natural eye for the unusual whether it be camera style or attention to surrounding detail. Schivazappa, by comparison, is rather more laid back in his approach. My score for this is 5 out of 10.