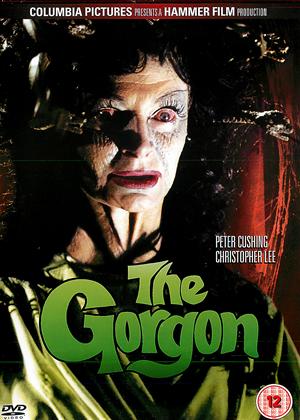 Reviews (1) of The Gorgon

From the opening credits, this could only ever be a Hammer film. James Bernard’s trademark scores, a matte paining of a castle in the distance (which makes a very effective screensaver), a young girl in distress and Peter Cushing tinkering in an ornate laboratory: formulaic such an intro may be, but it produces an instant warm glow in retrospect – which is probably the polar opposite of the effect hoped for back in 1964.

Wheeling in a fresh corpse, Nurse Hoffman (Barbara Shelley) is somewhat alarmed when the hand that falls from the stretcher breaks in half, as if it is made of stone. Pretty soon, the dead girl’s bohemian fiancé has hung himself, revealed in close-up. The warm glow becomes distinctly frosty.

So too, are the characters we meet in this production. On seeing the Medusa, or more specifically her glare, characters become aged. That is, they appear to be sprinkled with talcum powder in a cheap looking effect that is never convincing. Christopher Lee’s Professor Karl Meister comes already doused in talc, to lend maturity to such a man of learning, pompous and aloof. Even the avuncular Cushing is starchy in this. Only Richard Pasco succeeds in injecting some naturalism into his role, the almost-hero Paul Heitz. We cry out for a Michael Ripper or a Miles Malleson cameo to lighten up the mood.

Whilst professional and polished, the production is somewhat perfunctory, and there is a damning coolness to the sporadic ‘scares’ – whereas in reality, only the finale, with Barbara Shelley’s transformation into the deadly Megaera, succeeds in providing any shivers, and the less than stellar realisation of the creature – complete with adorable plastic snakes - ensures that even the climactic scares are pretty bloodless (which, considering Hammer caused a sensation in the late 1950s with its blood red horror that in turn both repulsed and fascinated audiences, is disappointing). Like ‘Curse of the Werewolf (1960)’, the thrills are strictly confined to the last ten minutes, which is asking too much of this particular audience member.