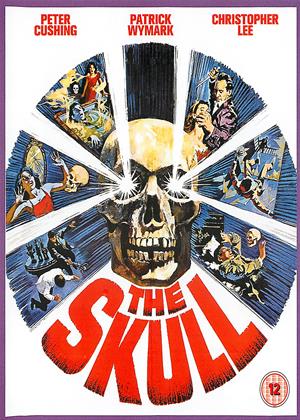 Reviews (1) of The Skull

A lesser Amicus offering ... - The Skull review by NP

Robert Bloch’s short story is given the Amicus treatment in one of their early horror offerings. They’re probably better known for the anthology films that marked them out from stablemates Hammer, and you might be forgiven for wishing this was a shorter chapter alongside other stories. Certainly, I felt that way.

Milton Subotsky’s script adaption apparently ran somewhat short of the required running time, so it fell to veteran Director Freddie Francis to fill time be panning shots across rooms and padding out further scenes in order to reach 83 minutes. Once you know this, it is easier to forgive the leaden pace, even at dramatic moments, and perhaps find yourself more sympathetic to the usually excellent Peter Cushing, whose climactic moments go on for far too long.

Cushing shares the credits with Christopher Lee, who isn’t featured much, and Michael Gough, who is featured even less. Also in the impressive cast are Patrick Wymark, Patrick Magee, Peter Woodthorpe and George Colouris – all terrific actors, and all deserving more screen time.

The skull of the title is given the full horror treatment by Francis – hallucinogenic lighting effects and even some impressive ‘floating’ scenes. The power it exudes over the characters is well conveyed, and yet the film ultimately falls a little short of its contemporaries and remains, for me at least, a lesser Amicus offering. My score is 5 out of 10.