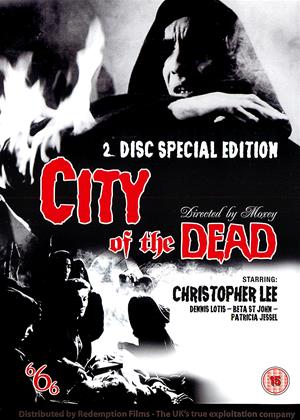 Reviews (1) of The City of the Dead

Spoilers follow ... - The City of the Dead review by NP

The first thing that strikes me about this studio-bound chiller is its cast of (mainly) British actors labouring under soft American accents. Presumably designed for ease of selling to an international market, it nevertheless seems an otherwise unnecessary distraction and slight deviation from the heady atmosphere of this Milton Subotsky-scripted production. Produced by an uncredited Max Rosemberg, this could be seen as a fledgling Amicus project. Amicus were to become rivals to Hammer’s horror output over the next decade.

Stunning Venetia Stevenson plays Nan Barlow, whose occasionally wooden performance is recompensed by her extraordinary screen presence. Her prolific acting career would be over the following year, and she remains something of a cinematic enigma. Here, she is joined by a scowling Christopher Lee and Valentine Dyall, as well as a formidable Patricia Jessel in the dual role of Elizabeth Selwyn and Mrs. Newless.

“I warn you, young feller. They don’t like strangers in Whitewood.”

Douglas Gamley and Ken Jones’ music score veers from traditional horror accompaniment, which enhances the gloom, and light jazz, which doesn’t; it does, however, lend a sense of laconic style to some scenes, especially those featuring Stevenson.

The ending is unlikely given the circumstances and I can’t imagine that didn’t dawn on the players and those behind the scenes. And yet everything is played very seriously and the low budget is used to fine effect, giving everything an ethereal, not-quite-real sense of displacement.