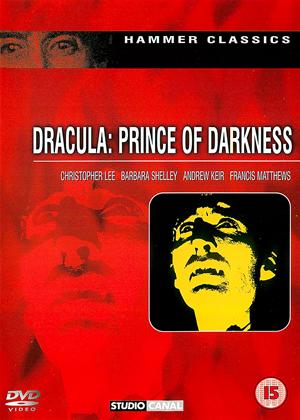 Reviews (1) of Dracula: Prince of Darkness

Silence ... why? - Dracula: Prince of Darkness review by NP

Either Christopher Lee wasn’t asked to reprise his famous role, or declined the offer to appear in a sequel to 1958’s ground-breaking ‘Dracula/Horror of Dracula’ for over seven years. While he pursued other projects the world over, Hammer had continued to make a name for itself as a major horror film company.

One of the most astounding aspects of ‘Prince of Darkness’ is that Lee’s distinctive voice, which was such a hallmark of his Count, is entirely absent here; Dracula is silent. Again, it’s never been made quite clear whether Lee refused to say the lines, or that he just wasn’t given any. Jimmy Sangster has said ‘vampires don’t chat’, and didn’t write any for his main character. Lee, never afraid to slate Hammer Dracula productions, has said he refused the lines given him.

Either way, this is a very ponderous, uneventful film. We have interesting characters like Klove, Dracula’s ‘manservant’, and a Renfield-type called Ludwig, both of whom do not have a great deal to do and seem almost superficial. The other characters are a stuffy bunch – Helen is made a little more interesting when she becomes a vampire, but is still very mannered – especially when compared to Melissa Stribling’s saucy Mina from the original. The acting is very good all round from a terrific cast, the characters just seem perfunctory. I really miss a formidable foe for Dracula. Andrew Keir as Father Sandor is enjoyable, but he is no Van Helsing.

The film also suffers from ‘sequelitis’ in that it takes half the running time for Dracula to be resurrected (in the film’s best sequence – certainly the most bloody), which means that his reign of terror lasts … just over half an hour. In the original, he had been terrorising his townsfolk for centuries.

Dracula’s demise is similarly cursory. It’s a fairly impressive finale – even if it does make The Count appear rather foolish – but pales when compared to grisly finale of the original.