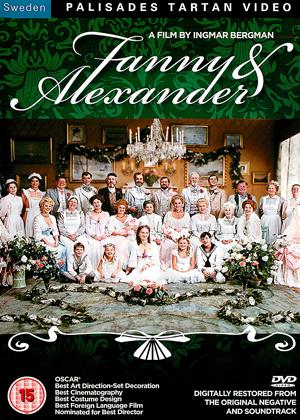 Synopsis:
Fanny and Alexander is Bergman's dreamlike family chronicle. The Ekdahl's are an upper-middle-class theatrical family sheltered by their own theatrics from the deepening chaos of the outside world. One tumultuous year in the life of the Ekdahl family is viewed through the eyes of ten-year-old Alexander, whose imagination fuels the magical goings-on leading up to and following the death of his father. His mother's remarriage to a stern prelate banishes Alexander and his sister Fanny from all known joys, and thrusts them and the movie into a kind of gothic horror.
The bishop is a Bergmanesque character whose severity has gone awry - he has become sinister - and the film's round rejection of him in favour of "kindness, affection and goodness" may be Bergman's fondest farewell to cinema.
Actors:
Bertil Guve, Pernilla Allwin, Kristina Adolphson, Börje Ahlstedt, Kristian Almgren, Carl Billquist, Axel Düberg, Allan Edwall, Siv Ericks, Ewa Fröling, Patricia Gélin, Majlis Granlund, Maria Granlund, Eva von Hanno, Sonya Hedenbratt, Olle Hilding, Svea Holst, Jarl Kulle, Käbi Laretei, Mona Malm
Directors:
Ingmar Bergman
Writers:
Ingmar Bergman
Others:
Sven Nykvist, Anna Asp, Marik Vos
Aka:
Fanny och Alexander
Studio:
Tartan
Genres:
Drama, Sci-Fi & Fantasy
Countries:
Sweden, Drama, Sci-Fi & Fantasy
Awards:

Reviews (4) of Fanny and Alexander

An Obvious Masterpiece - Fanny and Alexander review by JS

Thousands before me have described and praised this film so what can I add? Suffice to say its intricacies, themes and storytelling are sublime but the quality of the acting....wow! All film lovers should see this

What did I miss? - Fanny and Alexander review by JK

Thank heavens we only got the 3 hour instead of the 5 hour version. Yes, it was superbly shot and the actors all did well not to have nodded off between takes but I really must have missed an integral point with this film. A rather unprepossessing lad who says practically nothing throughout the entire film and his little sister are the Fanny and Alexander of the title and the film seems to have been shot through the eyes of Alexander who spends a lot of time sitting under tables swearing to himself.

The sets are sumptuous as are the costumes and it probably depicts life in turn of the century Swedish aristocracy very accurately and meticulously but who were all those people? What appeared to be three identical-looking brothers, each with their foibles. A woman who was supposed to be their mother but who looked considerably younger than all three of them and an assortment of wives, mistresses (one of whom limped for an unexplained reason) and servants in crisp pinnies.

They all appeared to live in one enormous house but 'going to grandmother's for Christmas' was a very big deal all round. A lot of screaming took place in this house which nobody seemed at all bothered about and somebody dies early on which brought on a lot of wailing and gnashing of teeth. Maybe this is an accurate depiction of Swedish life. Every so often, there was a lingering and meaningful shot of a weir with swirling brown water which lead you to think that something meaningful rather than allegorical was about to happen. I missed the next 20 minutes. Perhaps it was all made clear then. It resumed with another boy who appeared to be locked in a cage for his own safety found it necessary to take Alexander's clothes off whilst he whispered something in his ear. The one of the brother made a ludicrously long speech whilst encircling a room full of family and babies and lots of jolly floral garlands and it came to an abrupt end.

I'm certainly not a fan of fast-paced, action movies and plots rattling through at breakneck speed but this was the proverbial 'watching paint dry' albeit expensive and tasteful Farrow and Ball paint.

Magnificent, dreamlike and powerful - Fanny and Alexander review by Fiona

So many reasons to love this film: magnificent acting and sets, strange and enigmatic passages which stayed with me for a long time afterwards and a compelling "all human life is here" story. This autobiographical masterpiece covers the life and loves of an extended family through celebrations (Christmas, Christenings, theatrical shows) to tragedy (grief, parental violence, anti semitism) it is deeply meditative about human frailty and also the triumphs of the human spirit whilst being highly dramatic. The performances from the children are as accomplished of those of the older actors many of whom Bergman worked with regularly. Everyone will have their own interpretations about what it all means especially where Bergman slips into mysticism but this is what makes it a deeply engaging work and it is visually stunning. I have never seen a film of this length which seemed so short.

3 hour version. Despite being diffuse and unpredictable throughout, I felt that at all times the director was able to achieve precisely the effects he was seeking, no matter how elaborate or complex his demands were. We knew we were in the hands of a confident master.