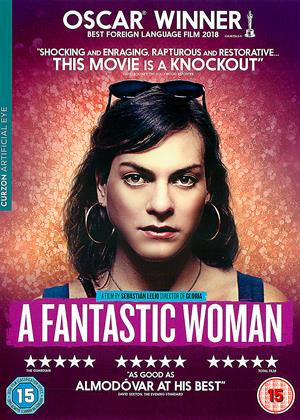 Reviews (6) of A Fantastic Woman

A film much vaunted by critics and the award ceremonies, but having watched it I'm struggling to understand why. Marina's story of discrimination and ostracisation in the face of a society that struggles to deal with her gender identity is worthy enough in terms of where its sympathies lie and what it's trying to critique, but there's so little real depth here. So being a transgender woman draws a great deal of prejudice and intolerance from other people - it's hardly an earth shattering revelation. The central performance is also rather wooden and unconvincing. It's hard to really sympathise with Marina, because she never comes across as a real, three dimensional person - instead she simply seems to be a rather crude mechanism through which to deliver laudable but simplistic messages.

A missed opportunity which I suspect gleaned so many awards and positive reviews because of its 'brave' subject matter and admirably liberal intentions - sadly these things are not enough to make it a good film. Perhaps in a world obsessed with virtue signalling most critics felt duty-bound to tell everyone else how great they thought it was!

Hard to categorise but worth a watch. - A Fantastic Woman review by Other Worlds

I have to say I enjoyed the movie ( I do hesitate to say this because its a movie that witnesses a a family reeling from the unexpected death of a loved one and whats to enjoy about that ? ) but it is a reminder that movies can be about anything the film makers want and if they do it well then that movie will likely find an audience. This movie is done well and if you make/watch movies then that's not a bad lesson to learn.

The fact that the main subject of the movie is trans does seem to have occupied an enormous amount of attention in the reviews - I don't know why really I never felt it was that important. It provides a useful plot device that makes it easy for the family to exhibit anger, fear and denial ( all stages in grief , which as I have said is what the movie is really all about ) but the film maker could just as easily have chosen some other hook to snag societal intolerance upon ( a more conventional gay relationship perhaps or a mixed race or religion relationship, age , financial status etc ) and the movie could have proceeded on broadly identical lines. It certainly got the movie attention and if you are trying to sell a movie there is nothing wrong with that.

If you are looking for a movie 'about the trans experience' though I have to say I think you are missing the point.

Had a decent soundtrack too , special thanks to re-introducing me to 'Time' by The Alan Parsons Project - a song we don't hear often enough :-)

Good in parts, but ultimately unsatisfying - A Fantastic Woman review by JR

Marina is a bit of a cypher - she seldom shows much emotion and has a rather expressionless face. Her deceased lover's family are almost pantomime villains; vicious and deranged with hatred simply because she is trans gender. She is also subjected to terrible indignities by the police but never thinks of getting legal help. From the title sequence I felt the film was going to be a cracker, especially with the use of the beautiful 'Time like a river' by the Alan Parsons Project which was moving and evocative. But the film started to drag a little with some unnecessary fantasy sequences, and by the end I hadn't learned much more about Marina despite watching her for an hour and a half.

A film about real life and real life prejudices: Although the plot is simple, the first-class delivery by Daniela Vega in the central role captures your interest and holds it through to the end.

No thank you - A Fantastic Woman review by BE

With dull and wooden acting from the lead, this was a mainly boring movie. Very little storyline which desolved in parts to fantasy. Watched it all in the hope that it would get better but proved pretty much a waste of time.

Not Quite Up To the Hype. - A Fantastic Woman review by TE

I agree with much of the other review on here, though I give it an extra star because I found the story itself absorbing.

The oppression experienced by trans women is portrayed in both broadbrush and nuanced terms, but Marina's face is little more than a changeless mask.

The flip from her being a cabaret torch singer to being a classical counter-tenor (the province of the 'castrati' in the past) is a little mystifying.