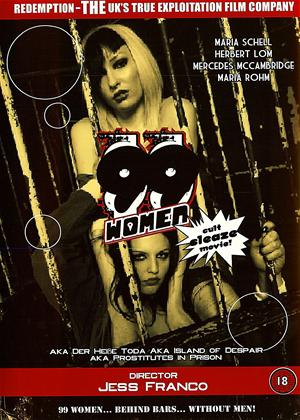 Here’s something – a Jess Franco ‘Women in prison’ film (his first), with Harry Allan Towers and not Erwin C. Dietrich, who would be associated with future incarceration endeavours. It is interesting to note the differences – this is nearly a decade before the Dietrich projects and the usual lesbian and titillation hasn’t reached graphic levels yet. Also Bruno Nicolai’s soundtrack almost seems to have been loaned from a blockbuster movie, lending more doom-laden atmospherics to the terrifically austere surroundings than is sometimes strictly necessary.

There’s a good cast here. Herbert Lom is always very watchable: I’m surprised he did this – his perverse cold-hearted Governor Santos is someone Howard Vernon or Paul Muller (or Franco himself) might usually play. Having said that, his peccadillos are always off-screen. Marie Schell is hardened and glamorous as Leonie Caroll, brought in to observe the activities of current governor Thelma Diaz. Diaz is played by the magnificent Mercedes McCambridge, short on stature but a performance as arch and camp as can be imagined. McCambridge (whose main point of interest for horror fans might well be her voicing of the demon in 1973’s ‘The Exorcist’) appears to relish each moment and steals every scene. Maria Rohm plays Maria who, blonde and pretty, is always in Diaz’s sights. And it is always a pleasure to see Rosalba Neri, here as constantly smouldering Zoie: a former ‘exotic dancer’, I’m delighted to say.

The Alicante location is delicious and the building used for the prison is suitably Spartan and yet crammed with interest. Flaking paint, featureless walls, paradise-like views always out-of-grasp. The whole production looks terrific and might well be Franco’s most restrained, coherent and ‘mainstream’ WIP picture. It also might just be my favourite. Things move at a fair rate, the relentless austerity is broken up by the flashbacks that flesh out the back-stories for the main inmates. The violence and torture takes place for the most part, just off-camera, and is no less effective for that. And the story builds up a genuine sense of frightening momentum towards the end, which makes the very satisfying finale tragically inevitable. Thoroughly recommended to those familiar with Franco, and those who are not.

The soundtrack is enlivened by the occasional insertion of variants of the theme song, ‘The Day I Was Born’ (sung by Barbara McNair, the wronged and wonderful Rita from Franco’s 1968 ‘Venus in Furs’), which is guaranteed to bury itself into your brain for a long time after you first hear it.