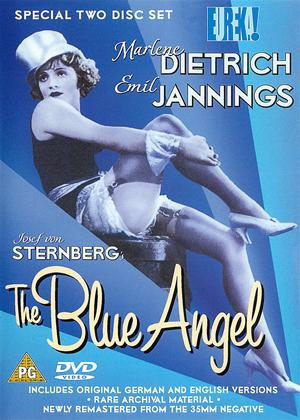 Sign up
Tabu: A Story of the South Seas

Cinemadiso's 1930s in Films Vol. 3
9 films by cinemadiso
Frankie's 1001 Movies You Must See Before You Die
982 films by frankie

Reviews (3) of The Blue Angel

A movie with a simple plot but populated by characters who are given rich complexity via the spectacularly talented cast.

The scenes in which Professor Rath journeys to and from the Blue Angel club, weaving through the distorted angles of the sharply twisted and confining expressionist urban landscape, are delicious. The sets, lighting and cinematography, combine in magnificent accord – and are astonishingly well rendered by this 2013 bluray restoration.

The movie culminates in an extraordinarily bleak conclusion - one which would likely not be permitted in this age of ‘test screenings‘ and lowest common denominator audience approval.

A masterpiece to be savoured by anyone with even the faintest interest in the aspirations of the creative arts and/or the mysteries of the human condition.

“Love's always been my game

Play it how I may

Not for me. - The Blue Angel review by BE

Watched the first disc for half an hour.  Totally unable to engage with this movie which was first made nearly 90 years ago. Won't bother with disc number two.

Warning: This is a classic. - The Blue Angel review by JG

This movie has a reputation as being a great movie and also as the one that made Marlene Deitrich famous. Being a movie fan I was eager to see this, but was disappointed. I didn't finish the movie.

My disappointment was because it was not what I was expecting. Marlene Deitrich is not the main character and does not play the central role. I got exasperated with the classroom scenes at the beginning and was impatient for the film to get going.

The film was made a long while ago, not long after the silent era, and should not be judged by today's production standards. It is also a foreign film and not a Hollywood product. If you want a film that thrills and looks polished then go elsewhere. If you are prepared to judge the film according to the standards of the time and follow the story it tells rather than the historical reputation it has acquired then you will get more from it. Particularly if you acknowledge that this is a continental film and not a mid Atlantic one. The review by AC gives a fair assessment from someone who understood the film. I do not understand why someone down rated it, perhaps they thought they were down rating the film, they had already done that by awarding 1 star.

The two disks have the same film but are different versions. Disk 1 is the original language version with subtitles. If you can manage subtitles this is the one to watch, particularly if you have a little German. The second disk is a separate re-shooting of the same film with English dialogue spoken by the original actors. The translation is not as good as the subtitles, some dialogue is omitted and the sound quality is poor. If you really can't get on with subtitles then it may be worth trying but I recommend avoiding it and watching the first disk.