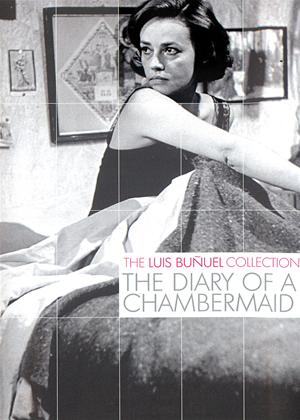 Reviews (1) of Diary of a Chambermaid

Serving Up A Bit Of A Disappointment. - Diary of a Chambermaid review by NC

All of Bunuel's accustomed betes-noires: the bourgeoisie, fascism, religion, are given the pasting you might expect, but 'Diary Of A Chambermaid' is one of his films where virtually everyone, and every institution, is battered. Only Marianne, a middle-aged skivvy, verbally abused by a member of the staff at the big house, and (so we are led to believe) sexually abused by the master of the house, is someone we can sympathise with.

A new chambermaid arrives, elegant and sophisticated, a bird of a different feather to the rest of the servants. She is witness to the vile racism of groom/gardener Joseph, plotting with the sexton to rid France of 'wops and kikes'. She puts up with the shoe fetish of the old man in the house, walking around the room for him in 'nice little booties'. She seems to be able to listen in on private conversations; not long after the master tells his wife he won't go near the new girl because she's from Paris, and carries Heaven knows what disease, she evades his marauding hands by informing him she has the pox.

When a child is raped and murdered in the woods nearby, she is pretty clear in her mind about who has done it, and stages a plan to trap him. Her excessive,unnecessary commitment to the strategy doesn't ring true in the slightest, and totally spoils the film.

Michel Piccoli, Muni, and Georges Geret are very fine, but there is one overwhelming reason to watch 'Diary Of A Chambermaid': Jeanne Moreau. Even playing a cool, understated character, displaying little emotion, but with a quiet ambition, she exudes light and fire. One of the greatest ever screen presences once again shows how the best make it look easy.