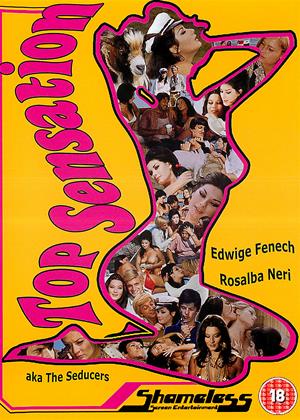 Synopsis:
The only film starring both Rosalba Neri and Edwige Fenech who are so exuberant, so impossibly gorgeous and act with such natural ease that, even when they stretch the boundaries (which they do, a lot!), they are always stylish and sexy.
"Top Sensation" is made with a flair which manages the impossible: remaining whimsical whilst portraying behaviour bereft of human compassion in a story of psychological abuse, kidnapping, incest and pitiless murder: Attempting to cure her troubled adult sons virginity, his mother and her mostly female friends embark on her yacht where lust, double-crossings and murder are on board! Originally rejected by British censors, Shameless has re-inserted prior cut scenes: one of a girl-on-girl, threesome-ravishment and the scene that has achieved legendary Cult status, featuring the luckiest goat in the world who takes a liking and a licking to an ecstatic Fenech.
Actors:
Rosalba Neri, Edwige Fenech, Eva Thulin, Maud Belleroche, Maurizio Bonuglia, Ruggero Miti, Salvatore Puntillo, Günter Hendel
Directors:
Ottavio Alessi
Producers:
Franco Cancellieri
Writers:
Ottavio Alessi, Nelda Minucci, Lorenzo Ricciardi
Aka:
The Seducers
Studio:
Shameless
Genres:
Drama, Lesbian & Gay, Thrillers
Countries:
Italy, Drama, Lesbian & Gay, Thrillers

It’s a familiar story. Not this tale of Tony, who is apparently mentally handicapped, and his mother Mudi (Maud de Belleroche) and friends’ attempts to rid him of his virginity, amidst exotic, sun-kissed locations. I mean the story of a film with a certain reputation presumed lost – or woefully incomplete – found and meticulously reconstructed, proving to be … mostly unspectacular.

Not since Godzilla trudged out of the water to confront a shabby Japanese King Kong have two more mighty icons shared screen-time together. Seeing two mighty giants of giallo films – Rosalba Neri (Paola) and Edwige Fenech (Ulla) – sharing screen time together is an almost surreal scene, and it is this pairing that probably ensured interest in ‘Top Sensation’. The result spends vast amounts of its running time exploring the tremendous environment and the equally tremendous star players.

Visually, it is great. The locations are incredible and lend themselves entirely to the casual paradise in which these rich layabouts live their lives. It goes without saying Fenech and Neri are masters of their craft: naturally beautiful and exuding casual confidence and a sense of presence, it is a pity this is the one and only time they are billed together. There’s a scene featuring Fenech and a goat that is as mind-boggling as it sounds.

Mudi is pretty fixated on her son’s plight, going to the lengths of implanting hidden cameras in the yacht and copping off with Paola’s husband Aldo (Maurizio Bonuglia). The stinger here is that Tony, despite being surrounded by such wanton temptation, falls for uncorrupted local farm girl Beba (Ewa Thulin). Only then do events turn particularly strange and nasty, and the shift from mild sex-romp to drama becomes apparent. This interesting development almost feels tacked on, it arrives so late, but is still very effective and unexpected.

The final scene leaves things open-ended but fairly gloomy, which is a good contrast to the sunny, carefree hi-jinks earlier on.