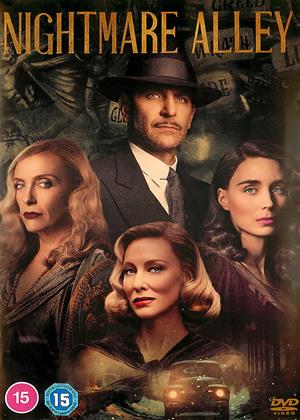 I'm a very keen movie watcher who has been frustrated in the last few year by the ever increasing volume of derivative movies and comic book stories to the detriment of quality.

For me at least this is an outstanding movie.

I will qualify this by adding that at two and a half hours is also very long and slow so some people may prefer to watch it in its two natural parts.

The story line is well written and the film very well produced and directed by Del Toro and co with haunting art deco sets and dark , brooding colours.

The acting from the principals and supporting cast is also superb.

I think critics have given this film 4 or 5 stars solely to follow the crowd and heap praise on the massively over-rated Mexican director Del Toro. His movies are always overblown and indulge in silly monster stuff, and even his influence on the Jurassic Park sequel was silly, much as I love dinosaurs, Critics bang on about his dark Mexican roots and the day of the dead blah blah blah. Not a style I like anyway.

This film is a mess. It is 2 films really. Or the first hour is a prologue - lasting an hour, Then a new film stats, drags on for an hour until the climax and predictable socalled twiest ending.

I did not believe the characters, esp Blanchett which seems to be a feminist nod to metoo, women in charge etc - the film poster (3 female faces and 1 male) would be part of that trend too.

I now want to watch the 1947 film of the same novel which I am sure will be better. Based on a novel of the 40s.

Watch the drama version of Barnum;s life if you want circus (not the Greatest Showman, the version without songs - I cannot remember the name). Or Return to Oz. Or Freaks. Or Dumbo, Not this.

I do not like using this word but this film was BORING.

Cut an hour out and it would have got 3 stars maybe, As it is 2 stars.

An enjoyably dark thriller, this is an evocative portrayal of carny folk and a highly troubled lead. It's certainly not perfect, and it does tend to lean into the pulpier aspect of the genre, particularly when it comes to Cate Blanchett's femme fatale (whose motivation I never could quite grasp) and the ending, which is both an obviously contrived moral comeuppance, yet still nicely satisfying. The performances are great all round, and the whole thing is gorgeous to look at. Those with short attention spans may be offput by the measured pacing, but if you like movies like 'Chinatown' I'd highly recommend this.

Guillermo del Toro’s 144-minute remake of a 1947 film, still set in the 1940s, is a film of two barely-connected halves. In the first half Bradley Cooper joins a rural carnival and learns how to pretend to read minds. While not exactly boring, it’s deliberately paced, sedately shot, has no score to add drama and lacks any plot thrust. Several well-known actors have bit parts before they’re unceremoniously dropped in Part 2. The whole 1hr+ of screen time could be cut to 5 minutes. Okay, maybe 10.

In the second half, with assistant Rooney Mara, Brad plies his trade in New York society, where he’s confronted by psychologist Cate Blanchett. This section gains some tension as he cons increasingly important people. There’s even a brief window of excitement, but it takes oh-so-long to get there.

Guillermo del Toro is a director who is most known for his fantasy, horror, and sci-fi productions of Hellboy, Pan’s Labyrinth, Pacific Rim, and The Shape of Water. He steps a tad out of his usual genre with Nightmare Alley, a remake of the classic noir thriller. His new take on the story is just as much a love letter to the original story of deception as it is another picture with his stylish flair coursing through every shot.

The film finds the 1930s drifter Stan taking an interest in a traveling carnival. Given that it’s a show with such features as a geek who can bite the heads of chickens, it seems like easy money. Even better, it’s a job where more money is possible if you can find the right way to deceive the audience. There’s a psychic act in the carnival that involves reading peoples’ minds via messages from a fire. The deception is simple enough that Stan can pick up on it after he’s hired by the crafty carnival owner of Clem (Willem Dafoe).

Though initially helping out with the grand mind-reading act of Madame Zeena (Toni Collette), he takes more of an interest in Molly (Rooney Mara). While aiding in the theatrics of her electricity showcase, he happens upon a formula from Zeena’s husband Pete (David Strathairn) that makes reading the audience even easier. Given that Clem finds it’s easy to take advantage of the alcoholic, Stan manages to swipe the secret from Pete during a drunken stupor that ends in his death. He runs off with Molly and seeks to make it on his own.

Of course, the con grows out of control quickly. Though romantically involved with Molly, Stan also finds himself getting involved with the psychologist Lilith Ritter (Cate Blanchett). She initially finds out about his scam but then opts to work with him, providing the key information on her clients for better cold-reading cons. But things get messy and Stan soon finds himself unable to keep up the crime game when the readings get trickier and relationships grow rockier.

Guillermo del Toro certainly adds some of his flair to this story. The carnival itself is quite a mesmerizing sight of elaborate displays and dark lighting. I particularly dug the elaborate setup for a device meant to fake electricity coursing throughout the body. He also perhaps has too much horror in the narrative. One of the most revised scenes features Stan and Molly trying to deceive the rich man Ezra (Richard Jenkins). When Molly has a change of heart about such deception, Ezra threatens to reveal Stan’s whole operation. The ending of this scene is far more violent and profanity-laden than the original film I almost wished the film was a tad more modern if only to appreciate how much Jenkins can cuss up a storm.

While Nightmare Alley isn’t exactly a major improvement over the previous film, as well as being one of del Toro’s lesser films, the film is still sufficient enough to be a pleasing psychological drama. It has some stylish touches here and there as well as featuring a far darker ending that finds just the right point to end. It’s perhaps longer than it needs to be but it’s a decent reminder that Guillermo del Toro isn’t just a one-genre director who can venture outside of his familiar genres.