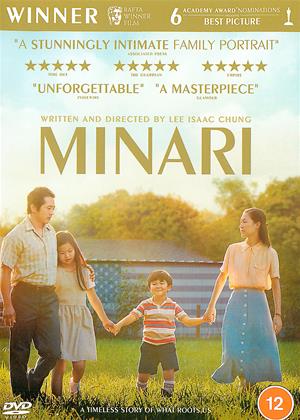 A rare look at a Korean family trying to make a go of it in 1980s Arkansas, Lee Isaac Chung’s autobiographical, low-key piece is warmly observant and gently humorous but also doesn't shy away from the enormous strains the struggle places on the family. It's a very specific context but also universally relatable.

The opening shot of the family arriving at their new home—a dilapidated trailer sitting in the middle of a field - neatly subverts the white-picket-fence American Dream, and we're immediately aware that things are going to go very wrong between horrified wife Monica (Yeri Han) and her defiantly optimistic husband Jacob (Steven Yeun) for whom this marks a step up from the humiliation of working in a chicken hatchery. Jacob has big dreams of building out a small farm on his land, composed of Korean vegetables to cater to the growing Korean immigrant population in America, but the strains this puts on the relationship with Monica provides much of the focus of the film and is very well-handled. Another key development is, after a marital bust-up (neatly accompanied by the children making paper aeroplanes with 'don't fight' written on them - we've all been there), the arrival of Monica's mother, Soon-ja (Yuh-Jung Youn) from South Korea. Not your conventional grandmother, the cursing wily matriarch only adds more conflict: young David, in particular, resists her presence with all the (considerable) ammunition at his disposal. While predictably, the two misfits eventually form a bond, Minari expands upon this rather clichéd connection between grandmother and grandson (yes, Ozu’s Tokyo Story does come to mind) to tackle more substantive issues of what it means to cultivate a better life and what it takes for relationships to survive and thrive, even in the worst of times.

Chung's affection for his characters, and the Arkansas farmland where he grew up—always shines through, and there’s never a moment where you don’t root for and care for each family member. There’s even a certain fondness for Will Patton’s Paul, a batty evangelical farmer with stringy hair and big glasses, who carries a giant cross on Sundays ('this is my church' he says), a wild detail that could only come from real life (as apparently, Chung remembered it from his youth). He's neatly contrasted with the po-faced regular churchgoers who, for all their going-on about Jesus and the Second Coming and whatnnot, don't ever seem to lift a finger to help.

There's some less successful touches - young David's potentially serious medical condition is all a bit superfluous and not very well treated, and the significant new adversity which provides an anchor for the third-act climax is all a bit heavy; the film is also insufficiently clear about showing how the family crisis is resolved at the end. However all in all a very highly-accomplished, totally absorbing piece.

This was a lovely film showing characters and a life we rarely get to see. It's an American slice of life that I know, being a Yank, but the British will find it

interesting and not the usual portrayal of life in the States. The cast is wonderful, and how they get children to be so convincing still amazes me.

An enjoyable story that presents a variation on the standard version of the American Dream. Here it is a Korean family seeking to establish a farm in rural Arkansas, but the virtues extolled are the familiar ones: hard graft and optimism will triumph in the end.

There is a thread of evangelical Christianity that gives the film an unnecessary extra twist. The previous owner of the farmland committed suicide and the man hired as a farm worker insists on performing his own version of an exorcism. He spends his Sundays lugging a cross around the backroads.

The film's main strengths lie in the details of the family members' characters: the granny's profanity and eccentricity; the young boy's growing independence; and the relationship dynamics between the mother and the father.

The 'minari' plant, quietly sown by the grandmother, provides a satisfying metaphor for true roots.

Beautifully shot with fantastic writing and character development. Minari is a wonderful and very assured film. It never resorts to caricature or stereotypes and even the more flawed parts are treated with sympathy. It is honest and contains many laugh out loud moments, when least expected.

An interesting story highlighting the struggles of life for many in rural Arkansas. Great characters, authentically and touchingly portrayed in depth, conveying more than at first appears. A film which encourages reflection on human relations.

A nicely sentimental family drama set in the 1990s about a Korean American family who relocate from California to Arkansas. Jacob (Steve Yeun), tired of his chicken factory job has brought his family, wife Monica (Yeri Han), daughter Anne (Noel Cho) and young David (Alan S. Kim) out to the back of beyond to an unworked 50 acre farm where he plans to grow Korean vegetables for the growing Korean population. Monica is sceptical and feels that Jacob has promised much but delivered little. With young David having to be near a hospital due to a heart murmur and the hard work necessary to get the farm working she thinks they've made a huge mistake. Jacob agrees to allow Monica's elderly mother (Yuh-Jung Youn) to join them from Korea. She's a cantankerous woman prone to swearing who spends her time growing a Korean herb, Minari, by a creek in the woods. But her arrival affects them all. The story is a pursuit of the American Dream narrative and the reality behind the dream, mostly told through the experience of young David. This is a film of real heart and while you wait, rightly or wrongly, for a racism issue to arise the film avoids this. This isn't a film about race it's one centred on family and the drive for a better life and the strain that results on marriage and health when the work is hard in order to find that life. Sad, humorous and gentle this is a quite lovely film that is worth checking out.

Bum-numbing drama about a Korean family moving to Arkansas in the 1980s to make a go of farming. It’s supposed to capture the ‘immigrant experience’, but it’s too dated for that and hardly universal. It’s plugged as ‘tender and sweeping’, but it’s hardly that either. Perhaps it worked as a book, but it needed a more cinematic approach to turn it into a good film. The end-result of the transfer to screen is uneventful, undramatic and unmemorable.

There’s a quiet grace to the somewhat slice-of-life story about a Korean family moving to Arkansas in the 1980s. The Yi family settles down on a plot of land they can call their own, living on a massive acreage that has the potential to become farmland. Some of the family is excited about this while others are unsure it’ll ever happen.

The family of four includes the hopeful father Jacob (Steven Yuen), the cautious mother Monica (Han Ye-ri), the eldest daughter Anne (Noel Kate), and the curious son David (Alan Kim). Jacob is the most excited about this endeavor, believing this is his chance to make his own way and work for himself. Monica has ample reason to be concerned. Aside from farming being a risky venture, their distance from civilization makes her scared for her children, both socially and health-wise. In particular, David has a heart murmur and he could fall ill at any time.

Another concern is just how much say Monica has in her family’s lifestyle. To make ends meet until the farm comes to be, both Jacob and Monica return to their regular job of sexing chickens. Jacob has been a pro for years but Monica still struggles to keep up with him. A Korean co-worker ensures Monica she doesn’t have to worry about meeting a high quota but her concerns are about being as capable as her husband. She worries about not being as stable on her own, as she fears that may be in her future if the farm doesn’t work out.

Trying to help out with the situation Monica’s mother coming to help watch the kids while the parents work and farm. Soon-ja (Youn Yuh-jung) arrives with great excitement about becoming so valued in the home. She doesn’t connect quickly with Jacob who feels that this woman is not a traditional grandma considering she doesn’t bake cookies. She does, however, like gambling and drinking Mountain Dew, just like Jacob. Eventually, she wins him over with her wise worldview that ranges everywhere from ecology to faith.

Director Lee Isaac Chung takes great care with his film to slowly let its drama and setting waft over the viewer. I like how we don’t learn what state the family is in until they arrive on their first day of work and don’t know the era until they venture to the bank for the first time. We get a sense of the personalities of the central characters but also secondary ones as well, such as the Yi’s evangelical neighbor who shows kindness but also a heavy amount of religious devotion, reserving his Sundays for hauling across around the country roads.

The Yi’s journey for the American Dream doesn’t take a predictable route either. It’s a life filled with hills and valleys, where blessings and tragedies come more at random than what may seem traditionally telegraphed. Through it all, the family bond remains a constant source that keeps things together, even in the darkest of times. There’s a scene towards the end where everything seems lost but David’s simple nature of keeping everyone together keeps things in perspective.

Minari is the type of film that eases into your heart for posing relatable characters and melancholic wonderment for the struggling working class. It doesn’t take as heavy a social route as one may expect for this type of story but it also doesn’t gloss over hardships for easy melodrama. In its own meandering manner, much is said on the nature of Korean immigrants, farm life, Christianity, and the troubles of finding a balance between the desires of children and parents. It’s an exceptional piece of American filmmaking in an area that feels rarely explored.