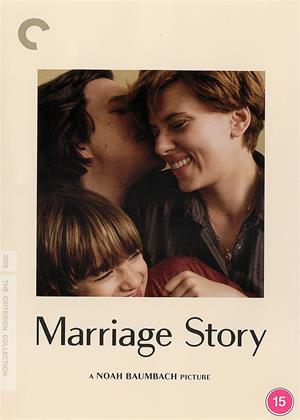 The film begins promisingly. There is the voiceover of a man and then woman and they are reading a description of their married life, and all they love about their partner. Then we cut to a marriage mediation session, and find these moving essays were a task so the session could start on a positive note. But the tone is set when Nicole refuses to read hers. She is an actress who is divorcing her meteorically rising star theatre director husband for what seems to be jealousy. At one point, she says she enjoyed being the star when she was taking the lead in his plays, but when she became just another member of the theatre company, and he became the star, she decided to take their child, leave New York for LA, and walk out of the marriage to pursue her own fame and fortune. They both agree not to involve lawyers, but Nicole soon engages a rottweiler lawyer, played by Laura Dern, and passively allows her to destroy the husband's life.

The film is far too long at 137 minutes and needs ruthless editing and more humour. The script feels rather stagey, theatrical and self indulgent, and culminates in a long cathartic scene where the couple lose all control and verbally tear each other apart. There are 2 Steven Sondheim songs inappropriately crowbarred in, although Adam Driver makes a pretty good fist of it.

Cannot believe the other recent negative reviews who seem to have missed the whole point of the story.

This a well acted, in depth study of the break up of a marriage, told with compassion and humour.

Great cast, great screenplay that is very rewarding to those who bother to stick with it.

Please watch it and judge for yourself.

Self-indulgent and emotionally stereotypical - main characters over-acting and hard to identify with (having been through a divorce myself). Thought it was a total waste of time.

If you love Kramer Vs Kramer (1979) then you will find it's influence here in this fantastic drama from director Noah Baumbach in what is probably his best film to date. The opening scenes where married couple Charlie (Adam Driver) and Nicole (Scarlett Johansson) deliver a list of why they fell in love with each other is a heartwarming opening montage that is actually the opening salvoes in an increasingly destructive divorce. She is a successful actor and he a theatre director who have a young son Henry (Ahzy Robertson), they live in New York but Nicole goes to Los Angeles, where she originates, to appear in a new TV pilot, when this becomes a series she wants to stay there with Henry but Charlie wants Henry to return to their home. An acrimonious divorce then develops aided by the nastiness employed by divorce lawyers (Laura Dern & Ray Liotta - both fantastic performances here). It's in turn heart wrenching and amusing and the two central performances are so good I'll be surprised if awards are not forthcoming. Alan Alda has a nice cameo as a down to earth and gentle grandfatherly older lawyer. The film has some painful scenes but it's blended with regrets over lost love, fear of loss and I've no doubt reflects the utter despair when break ups go awry. A must see film.

Not the film i expected - Marriage Story review by js

Although the reviews for this film were mixed i thought i woul give it a watch as wa different from the types of film i would normally be drawn to. Initially the storyline was OK but then became slow and didnt really develop and began to lose interest. That siad in the end it was the DVD that was at fault as it kept freezing and on inspection was quite marked so became clear was not going to be able to watch without constant rewind and fast forward etc which was dissapointed. Normally i would have asked for another disc to be sent out of the same film but given i was losing interest just decided to not continue. In summary , might appeal to some but too slow moving and predictable in places for me

Noah Baumbach has such a way with words that can make the predictable drama of divorce feel more palpable. It’s mostly because Baumbach’s writing doesn’t shy away from making dialogue feel real and relatable. There are angry bouts between the husband and wife losing their roles, sure, but also off-guard moments that may surprise. Parents don’t often speak of their children like pawns or investments in their legal issues. Some of them just talk about how well they can read and if they’re pooping alright. These strange conversations but families are weird like that, even if Baumbach’s world takes place in one about the affluent.

Of course, it helps to have a stellar cast as well and Baumbach once again lands some top talent. Adam Driver plays the husband of Charlie Barber, a theater director who is seeing a rising career. He pairs well enough with his actress wife, Nicole, played by Scarlett Johansson. They have a son, Henry (Azhy Robertson), who they love very much. They have their quirks and their hangups but seem to connect rather well. It is for this reason why the film starts with their divorce already in the making, though not asking too much backtracking in how they came to this point. The truth is that divorce just sometimes happens and people drift. The real questioning within Marriage Story is just how easy that final drift can be or, rather, how difficult divorces proceed.

Though Charlie and Nicole seem to want an amicable divorce, other forces change their perspectives. Namely, it’s their lawyers. Nicole hires Nora (Laura Dern), a passionate woman who tries to stress how important it is for Nicole to be firmly independent. Charlie at first hires the lawyer Bert (Alan Alda) who seems kind but also weak. He will later hire the more furiously determined Jay (Ray Liotta) who is willing to play dirty when it comes to the custody of Henry. Though Nicole and Charlie both want what’s best for their Henry, others seem to think they should be fighting for more. Many misguided voices lead them astray, even the ones who mean well. Charlie’s oldest actor in the troupe (Wallace Shawn) talks about divorce more as an opportunity to have a lot of sex, coming from experience.

Driver and Johansson deliver some of their career-best performances for both their tender moments and heated exchanges. The bookend bit features them writing lists of what they admire most about each other and it’s spoken in such a relatable and honest way that nearly brought me to tears for the earnestness. The way they speak of tea that goes cold and Halloweens that feel lackluster holds an emotional resonance most keen. Then there’s the more notable scene of Driver and Johansson exploding on each other in the boil of fury about how much they’ve grown to hate each other. Driver’s anger is so immersive I questioned whether it was part of the script for him to punch a hole in the wall or if that just came about in heated improvisation.

Marriage Story meanders a bit here and there and often finds some odd avenues of comedy. There’s a scene where Charlie accidentally cuts his hand open amid a social worker in a manner that is darkly comedic and so off-beat it’s probably the most hilarious moment. Armed with astounding acting, every scene is so well crafted with Baumbach’s adept ear for dialogue and a way to make us care about such characters. The little details make this such a stellar picture of how divorce is a messy experience, even for people who seem so confident and clean.