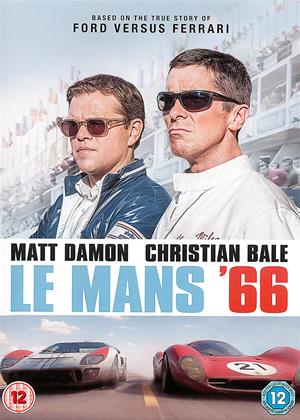 Had to be a four, as so much junk about, if someone makes a decent effort it should be acknowledged. Bale of course went to States from UK when 17 with his dad, hence he can pull off the Ken Miles Sutton Coldfield accent fairly well. Damon looking a bit plump now methinks. He does not have a very special part here.

Tells the story quite well. Was a race of attrition. Shame they could not get more of the atmosphere into it, just centering around the guys. The Marcos was almost the star for the crowd, yet no mention, or little cameo for it. There were other interesting cars involved, although Ford and Ferrari did swamp the entries. Most all their cars went pop! Porsche did way better on reliability.

This is an excellent film - it has everything, especially for pistone heads, historians and fans of good acting and effects.

I believe its based on fact with some emotional, great acting scenes and of course lots of racing and sports cars.

This is a good film, it's good no problem but it isn't the super stellar incredible amazing film I had expected and wanted it to be, it slightly fails and falls short of greatness.

It is just too Matt Damon and Christian Bale, it is too focussed on them, it would be much better if they had given the leads to some less famous actors and focussed more on the story because they are being themselves acting the roles, might not make much sense but you'll see what I mean if you watch the film.

The cars are cool and the Henry Ford v Ferrari racing scenes are really enjoyable. The budget is big, the effects are great and I really enjoyed the film, the true story is well told but maybe a bit too "Hollywood".

Overall a good film and I am a Midlander so loved the Bale accent which he pulled off pretty well.

It's good honest, just not as good as I had hoped...but good!

Two dimensional school boy nonsense, with added national stereotyping. I persevered for 40 minutes but the insults to my intelligence and maturity got the better of me.

Really good film, not just for car enthusiasts but for the personalities portrayed with such top class acting. I was really moved and went and did a web search to learn more.

This is an example of what you get when everything is done just right in a movie. The story and original characters are genuinely interesting and absorbing (so much so that I was inspired to go and read up on it all, and the people, later), the actors are uniformally excellent, and the script is pitch perfect.

You really don't have to be a petrolhead to love this (my partner isn't, and she really did).

Matt Damon goes from strength to strength, and Christian Bale is even better than normal. And *all* the supporting players are bang on the money.

bit to fake for racing fans, but entertaining stuff when off track - Le Mans '66 review by JD

Rush was a huge surprise to me. It was brilliant. Even my partner thought it was great.

What that did was bring the larger than life characters of hunt and lauda to the forefront and pushed much of the 'boring' (for most movie goers!) engineering and racing to the back.

This story is a bit different. Yes it tells the story of 2 great men, Ken and Carol but the film is based on Fords first lemans victory.

As such there is a lot of car action. And this is risky in my opinion. As a racer myself i found the car scenes cheesy and inaccurate. Theirs lots of changing up and down gears at 200mph, cars braking from 200-50 in a matter of metres, drivers staring at each other at 200mph etc all very silly, etc.

That said, the Ferraris and GT40's looked gorgeous and it was great seeing a real willow springs.

Outside of that its well done. They are forced to quickly mention, twice, the GT40 was sent over from england which was funny given its a story of american success! Well apart from the driver/engineer Ken of course....

The film covers lots of interesting points, the brake reliability and the chapman like rule bending approach to get around it, and then getting one over the famously awkward french stewards. The Corporate US approach v European racer approach and many other little things are well handled and keep the film interesting.

Its a good film telling the story of one of the most iconic cars ever made, 2 great men and 2 legendary companies.

I just wish they had left the cheese at home.

This is an amazing story, very well told. Henry Ford II, after being insulted by Enzo Ferrari, is determined to do whatever it takes to beat Ferrari at the 1966 Le Mans race. The two men tasked to do this are the wealthy sports car designer Carroll Shelby (Matt Damon) and the eccentric but brilliant Englishman Ken Miles (Christian Bale). The two lead actors are outstanding. Even if you are not into motor racing, the racing scenes are very exciting. A fascinating true story of triumph and tragedy.

Not at all into cars but the film was brilliant from start to end. Really interesting getting to learn about the history of Ford and the acting was first class.

I’ll be honest; racing films tend to bore me. While looking spiffy with multiple machines zooming across a track, some of them spend so much time trying to catch up with the cars and their allure that the picture loses sight of itself, falling back on melodrama to carry. I wasn’t particularly enthused about a picture that seems to be more about the thrill of the race than a more personal sense of winning. But for shifting the race itself to be one of fulfillment and yearning, I must admit that James Mangold’s Ford v Ferrari had me wrapped up in the race.

A lot of forces came together for the grand event of Ford competing and winning in the legendary Le Mans race of the 1960s. Carroll Shelby (Matt Damon) has run the race before and is now a struggling designer. Ken Miles (Christian Bale) is a WWII veteran struggling to make it as both a mechanic and racer. Fortunately for both of them, the Ford motor company is also struggling and needs them, even if they don’t know it. While the stuffy CEO Henry Ford II (Tracy Letts) isn’t so easily swayed by such a suggestion as racing in the Le Mans, Ford’s vice-president Lee Iacocca (Jon Bernthal) seeks out Carroll. Carroll seeks out Ken. And before the two old friends know it, they’re working on a race car for Ford they plan to drive.

Mangold’s direction not only finds a lot of amazing shots but finds something special within the characters. It’s interesting that both Carroll and Ken are not committed to driving a car in Le Mans to make amends or finally beat their rival. If anyone is a rival here, it is Ford. When Carroll is hired, Ken warms him that a large corporation like that will come down on him with conditionals and hold him back from making the fastest vehicle. Sure enough, Ford does come down with harsh demands, specifically that Ken can’t drive as he’s not the image that Ford wants. After all, Henry finds the likes of James Bond to be a deviant not worth chasing and other executives look upon Ken as a beatnik, which could just be their own jargon for ugly people.

On one hand, this kind of framing doesn’t present an immediate conflict but a much different one. The only huge stakes are for Carroll when, at one point, he puts his garage on the line to see if Ken can win in a race to prove he’s worthy of Le Mans. They succeed and from that point forward it’s mostly making sure the executives don’t interfere too much in the process of building and racing, which they constantly do. There is, however, a more engaging concern of whether or not Ken’s car will hold up on the track for going so fast. He can certainly push a car to its limits but whether the car can take it is another story. And as the race proceeds, both beating the other racers and surviving a 24-hour race create becomes intense.

I must admit that the race scenes really got me engaged for how well they are shot. Free of most shakey cam techniques and inappropriate angles, it’s clear what is going on in nearly every scene. Scenes of cars toppling and exploding don’t feel like standard ramping of tension but real concern when considering the possibility of death. This is stressed in a particularly great scene where Ken tests a car just as the brakes go out and the car is set aflame. He gets out just in time but Ken’s son later questions how his dad survived. As long as you get out, Carroll’s assistant stresses, you’ll be fine. This particularly nerve-wracking during the Le Mans as it starts with Ken’s door not closing all the way, leading to the door being smashed into place with a hammer. It’s both a callback to the beginning of the film with its insistence on blunt fixing issues but also a twinge of fear for the race ahead.

There’s a more lingering question about how much Ford screws with racing and the development of car production that never feels fully addressed. But for maintaining focus on both Carroll and Ken as two spirited and emotional geniuses just yearning for cars, their comradery shines bright in the picture. It’s also a strong performance by both Damon and Bale, even if they must get into a scene of fighting each other with groceries. As someone who never quite grasped all the mechanical terms and appreciate the lineage of the story, I found myself so enthralled by Ford V Ferrari on many levels.