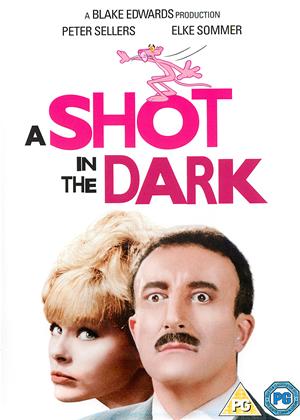 Rent other films like A Shot in the Dark

This often hilarious but weirdly disjointed film came about almost by accident, since "The Pink Panther" was meant to be about an upper-class crook called The Phantom, featuring Inspector Clouseau as comic relief. I can't think of another example of a supporting character stealing a film so completely. Poor old David Niven. Even the opening credits ended up getting their own TV series!

Peter Sellers' next film was originally going to be a screen adaptation of a risqué Broadway farce in which an out-of-his-depth French policeman (played on stage by William Shatner!) has to solve a murder case where everybody is guilty of something or other, except of course the cheerfully amoral oversexed bimbo in danger of being framed for everything. When the studio caught on how popular Clouseau was, since one funny French cop is near-as-dammit the same as any other, the script was hastily rewritten as a lighter and sillier Clouseau vehicle , with the sex and violence watered down as much as it could be without the plot disappearing altogether, though there's enough of it still left for William Peter Blatty, author of "The Exorcist", to get a screenwriting credit.

Clouseau is Laurel and Hardy rolled into one, combining Ollie's perpetually wounded dignity with Stan's inability to interact with anything in any way without laying waste to the surrounding area. Sellers' performance as a man at war with the furniture, his own clothes, and the laws of probability is a masterpiece of clowning, but it's such a poor fit with the more serious elements of the plot that the crimes Clouseau is supposed to be investigating are increasingly shoved into the background, allowing him to spend most of the film stumbling into predicaments which often have very little to do with his being a policeman. By the time the surviving suspects are assembled at the end to hear Clouseau's triumphant (he hopes) solution to the mystery, we've forgotten who most of them are.

But the flaw which almost ruins the whole movie is the introduction of Herbert Lom's Chief Inspector Dreyfus, who would reappear in another six sequels, long outlasting Inspector Clouseau in his own franchise. I can't imagine why, because Lom is absolutely dreadful. Obviously a clumsy plot device to allow the fairly realistic villain played by a largely wasted George Sanders to be sidelined as much as possible in favour of a more appropriate nemesis for a nincompoop like Clouseau, Lom's grotesquely overacted descent into insanity is embarrassingly unfunny. It also constantly begs the question why, if Clouseau is worse than useless at his job and his boss hates him so much it's literally driving him mad, he wasn't fired years ago.

It's a muddled and patchy movie that's superb whenever Sellers is simply being funny, lousy during Herbert Lom's attempts to convey that he's going a bit mental, which he does far more often than is strictly necessary, and somewhere in between the rest of the time depending on how well Sellers is interacting with his supporting cast. Elke Sommer isn't much of an actress but she's cute and gamely joins in the silliness, though George Sanders sometimes looks as if he's not quite sure he's in the right movie. But a special mention has to go to Burt Kwouk's Cato, who may be a one-joke character (and politically incorrect by today's standards), but seldom has one joke been told with such enthusiasm!

Admittedly the routine was wearing a bit thin by the time he reprised it for the last time, but that was another six movies later, when the entire franchise was well past its humanely-kill-by date, and Peter Sellers had actually died quite some time ago. In 1964 it was still fresh, and this, the first true Inspector Clouseau film in which he was the main character, is probably the best of the lot, despite the mismatch between its hapless hero and some parts of a script originally written for a less defective detective.