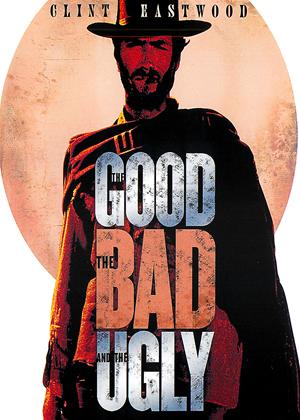 More like The Good, the Bad and the Ugly

Reviews (5) of The Good, the Bad and the Ugly

Sprawling, epic Western - superb stuff! - The Good, the Bad and the Ugly review by RP

It's a 'Spaghetti Western'. With Clint Eastwood in the third of his 'Man With No Name' roles, directed by Sergio Leone, the master of the sub-genre and with a score by Ennio Morricone, what's not to like?

This is a sprawling, epic tale about the search for $200,000 worth of gold coins set against the background of the American Civil War. There are three main protagonists - the Good (Clint Eastwood as Blondie, although he's not noticeably blond), the Bad (Lee Van Cleef as Angel Eyes) and the Ugly (Eli Wallach as Tuco). Van Cleef is a violent, implacable, pyschopathic baddie, Eastwood is a bounty hunter with an uneasy partnership with Wallach, who provides a certain amount of comedic relief. All play their parts well.

The film displays Leone's characteristic use of wide camera shots cutting to extreme close ups which matches well with the sprawling scenes of the film - semi-deserted townships, the desert, a town under bombardment, defeated Confederate troops, Union prison camp, open countryside railway scenes, battlefield between Confederate and Union troops, and the finale at the huge Sad Hill cemetery.

The film is just under 3 hours long in its 2003 restored version and some may find it slow moving. Not me - the director builds each scene to a climax of violence, all the while drawing the story to its climactic three-way duel and the final dénouement. Great stuff.

This is my favourite Western. Also in my top three are 'Once Upon a Time in the West' and 'For a Few Dollars More' - both directed by Leone. Add to these 'High Plains Drifter' and 'Unforgiven' and you can see that my taste in Westerns was perhaps changed forever from the John Ford / John Wayne masterpieces of the 1950s to the dramatically different style of the genre from the 1960s onwards.

Another reviewer commented on the bad lip sync. The film is Italian ('Il buono, il brutto, il cattivo'), each actor spoke his lines in his own language, and the film was dubbed in post production. The bad synchronisation is from the dubbing of original Italian dialogue into English.

I must have seen this film 50 times over the almost 50 years since it was made and I enjoy it every time. Superb stuff - 5/5 stars.

"The classic" but poor production - The Good, the Bad and the Ugly review by JD

There can be no one on earth who does not know this western. I found the poor synchronisation of sound with mouth movement annoying. I remember it being so when I first saw it. Can't it be realigned in this era of high tech? By modern standards the special effects (sun-burn for example) are a stretch of the imagination. For a cowboy fan though, there can be no greater classic. This is the film for those with a wild imagination and new pair of spurs.

Epic Horse Opera - The Good, the Bad and the Ugly review by Count Otto Black

Although everybody thinks this is a sequel to the two "Dollars" movies, it's actually a prequel set at least ten years prior to those films. And I very much doubt it's even that, since Clint Eastwood's "Blondie", although he does don the iconic poncho over 90% of the way through the movie, doesn't appear to be the same character (in particular, he's far better at using a rifle). I suspect that, just as "Angel-Eyes" was supposed to be played by Lee Marvin, but he was tied up making "The Dirty Dozen", another actor was originally cast as "Blondie", hence his nickname, and the reference to him having "golden hair", which Clint Eastwood conspicuously doesn't. Possibly Lou Castel, who was rather good as an amoral bounty hunter in "A Bullet For The General"? Or even Terence Hill?

Anyway, this remains one of the greatest westerns ever made, possibly the greatest of them all. The characters are, as title implies, pure archetypes (though Clint Eastwood insisted on a partial rewrite to justify his character being called "good"; it was his idea to include a scene of Blondie playing with a kitten). Angel-Eyes is an absolute bastard with no redeeming features whatsoever, and Lee Van Cleef nails it perfectly - even Blondie's a little bit scared of him! Blondie, oddly enough, is the least interesting main character, maybe because, as Eastwood pointed out at the time, he's not really very heroic as heroes go. And Tuco? Eli Wallach turns it up to eleven and steals the movie hands down as a complete and utter rat who you can't help liking even if you're not sure why. As a famous reviewer once pointed out, Tuco doesn't deserve the money they're all after, but he wants it so much that you end hoping he gets it.

One huge difference between this and lesser spaghetti westerns is that, instead of piling on even more violence than previously because massive, gory gunfights are what the genre is all about, this film isn't afraid to move at a surprisingly stately pace, with long stretches of scene-setting and character interplay between the inevitable bloodshed. The bloodiest scene, a truly epic depiction of a battle in the American Civil War, isn't glamorous at all, and bluntly informs us that war is a senseless waste of human life. As for the climactic showdown, it mainly consists of three men standing perfectly still for several minutes. And yet it all works magnificently. You really believe in the stylized world these impossibly skilled gunfighters inhabit, in a way that no modern superhero movie has quite managed to achieve. Of course, Ennio Morricone's score helps no end. Not all of his many, many film scores were great, and some were so bad they sounded like self-parodies, but this is perhaps his best, and certainly his most famous.

This version restores nearly all the footage excised from the original cut, some of which helps to make sense of the plot, such as explaining what Bill Carson is doing in the middle of the desert, and why Angel-Eyes suddenly pops up in charge of a POW camp, so if you haven't seen this movie for ages, it's worth taking another look. Though they probably should have left that surreal scene with Tuco in a strange artificial cave talking to a dead chicken on the cutting-room floor...

Classic - The Good, the Bad and the Ugly review by HM

Well the 5.1 sound isn't that good Blu-ray fans and the music is a bit screechy. However, the story and performances are top of the tree. Leone didn't get all his first choice actors but the whole cast gels perfectly so the film just got lucky! The music score is the real star giving gravitas to each scene. Leone cannot 'do women' so they are portrayed, as usual, as a whore or Madonna; very Italian (bear in mind this film is mid-sixties).

Hard to believe people have not seen this movie, but westerns are not popular now so younger peeps may have ignored it. Do see it as the 'Man with no name' trilogy re-wrote what a western is, normally, Mexican Hispanics are treated as gun fodder, but here the European origins of American culture are on show. Also, westerns had been a celebration of triumphant America values as the power emerging from the second world war on top and nothing much to do with the actual west. Leone sees a very different America and one which probably surprised Americans!

The problem with the the Man with no name series is that Leone uses the same actor for multiple characters. Lee Van Cleef is a different character, Leone originally wanted Charles Bronson in Lee Van Cleefs's role. It does not adequately explain it in the film. As much as Lee Van Cleef is a good actor I feel a totally different actor would be better.