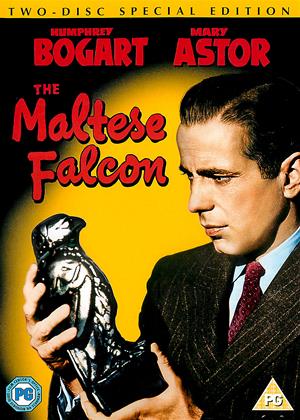 Reviews (2) of The Maltese Falcon

For this third version of of Dashiell Hammett's classic novel, first time director John Huston just filmed the book. All the dialogue was Hammett's and there were no embellishment with the plot. Former Pinkerton Agent Hammett knew what he was writing about, and in Sam Spade, he gave us cinema's first authentic PI. And Humphrey Bogart's first signature role.

But the rest of the story is actually quite theatrical, with the elaborate McGuffin of the Knight Templars' falcon, and the band of colourful crooks in it's pursuit. That the three male conspirers were obviously gay, seems a remarkable detail now, given that the Hay's Commission was in full swing.

Where The Maltese Falcon really scores, is in its casting. Bogart is great as the morally ambiguous, fast talking Spade. Mary Astor is the deliciously duplicitous femme fatale, Brigid O' Shaughnessy, a legendary character for fans of Film Noir. Elisha Cook and Peter Lorre are treasurable as the henchmen, Wilmer, and Joel Cairo. But perhaps best of all, Sidney Greenstreet as the huge, loquacious, dangerous Kaspar Gutman.

The Maltese Falcon is a fascinating thriller, with its cast of totally unreliable criminals, and a hero you are never sure of. It is stuffed with fantastic dialogue, particularly in the wonderful final scene. Arguably it is the first Film Noir. And it seems to get better with each passing year.

Comforting and nostalgic entertainment - The Maltese Falcon review by RJ

I find it difficult to adopt much of a critical/intellectual approach to films like this. I've never quite got my head around viewing directors like John Huston as 'auteurs', at least not in the way that I understand, for example, Kubrick, Lynch, Weerasethakul, Chaplin, Tarkovsky etc etc to be auteurs. My tendency is to view directors like Huston, Hawks and so on as being efficient, reliable and skilful directors who knew how to tell stories in an entertaining way. This tendency is, I am sure, a reflection of my ignorance and no doubt does these directors a huge disservice.

All of which is just a roundabout way of getting to my point, which is that I do not come to films like The Maltese Falcon with the same kind of critical approach that I do for many of the other films that I watch. I view them as pure entertainment, and on this level The Maltese Falcon delivers the goods. It's an involving story about the various shady characters trying to lay their hands on the titular Falcon (a classic MacGuffin), a statuette believed to be hundreds of years old and worth millions of dollars. Humphrey Bogart plays Sam Spade, the private detective who gets caught up in the middle of it all. It's the kind of tough, cynical, wisecracking performance so well associated with Bogart. Add in the brilliant Sydney Greenstreet, Peter Lorre and Elisha Cook Jr and it all adds up to a highly entertaining couple of hours - what more could you ask for?