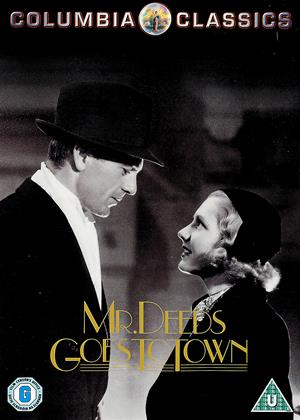 Rent other films like Mr. Deeds Goes to Town

Capra's legendary social comedy gives us an unlikely American hero, a rich man who wants to give all his money away. Longfellow Deeds (Gary Cooper) is an everyman from Smalltown, Anywhere, USA who inherits $20m. While he seems a little eccentric, especially loose on the streets of New York, he has a shrewdness that helps to protect him (for a while) from the chisellers and phoneys of the big city. One of these is fast talking newshound Babe Bennett (Jean Arthur) who squeezes the unwitting Deeds for celebrity scoops. When Deeds learns the girl he loves isn't all she seemed, he gives up and gets dragged into the swamp by the crooked lawyers, get-rich-quick bloodsuckers and vested financial interest.

At which point of course, Babe realises she has made a big mistake. This was a breakthrough for Jean Arthur on becoming a big comedy star. Gary Cooper underplays as the innocent, tuba playing provincial, a writer of greetings cards who becomes disillusioned by ambient American corruption. As ever, Robert Riskin's amazing dialogue is heavenly, and particularly adroit in voicing Deeds' idiosyncratic native wisdom.

If there is a weakness, it is that some of the social comment about America in the depression seems like editorialising. Unlike other Capra/Riskin films, it isn't spun beautifully into the weft of the narrative. And so, the last part of the film hardly seems like comedy at all, as they try to convince their audience to find a unified solution to the depression (and by implication, resist the vortex of fascism, which is what Capra's films increasingly fought). At times the film seems as naive as its hero.

There are many incidental pleasures, such as the unflattering representation of the Algonquin round table on Broadway. It is a story which has gone on to speak to many generations. Its theme, that the innocent will always appear weak and dangerous in the context of corruption is always pertinent. Deeds wins out because Capra can't send his audience home without hope. But there is a very frightening vision of America on show here.