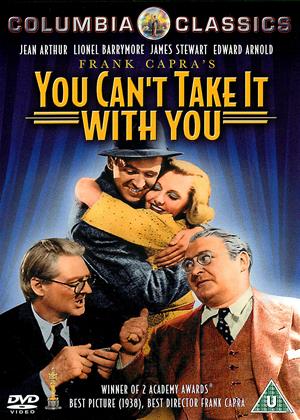 Rent other films like You Can't Take It with You

Reviews (1) of You Can't Take It with You

Exactly what makes a film a screwball cannot be precisely defined. Certainly these are rooted in misunderstanding and mayhem, but, then, nobody calls the Marx Brothers' work screwball. At two hours, You Can't Take It With You is longer than most, and it starts slowly. Put simply, there are two households, one presided over by financier Edward Arnold and the other a bunch of madcap inventors indulged by Lionel Barrymore who has long since thrown in capitalism and taken his winnings so that he can enjoy life itself – in a prime piece of real estate upon which Arnold has his eye as a crucial part of a complex deal. As in the board game Monopoly, one can only build hotels when one has all of that colour group of properties.

To all this there is a Romeo and Juliet element, for Barrymore's daughter (the ever-delightful Jean Arthur) works in the Barrymore building and has fallen in love with his son (James Stewart). All this sprang from one of the Broadway successes by Moss Hart and George Kaufman, augmented in some ways for the film by Robert Riskin – and seen through the eyes of director Frank Capra. He has often been deemed sentimental. Among those to do so was Graham Greene, who began his contemporary article about it with “as for the reviewer, he can only raise his hands in a kind of despair” and appears to deem it a variant upon A Christmas Carol. Two paragraphs on, Greene takes an about-turn. “It sounds awful, but it isn't as awful as all that, for Capra has a touch of genius with a camera: his screen always seems twice as big as other people's, and he cuts as brilliantly as Eisenstein (the climax when the big bad magnate takes up his harmonica is so exhilarating in its movement that you forget its absurdity). Humour and not wit is his line, a humour which shades off into whimsicality. We may groan and blush as he cuts his way remorselessly through all finer values to the fallible human heart, but infallibly he makes his appeal – to that great soft organ with its unreliable goodness and easy melancholy and baseless optimism. The cinema, a popular craft, can hardly be expected to do more.”

In many ways, the film is a series of vignettes, such as the night-time walk through a park by James Stewart and Jean Arthur who are treated to an ad hoc musical dance routine by a group of children who leave a mark upon her which becomes evident when Stewart takes her, in the very next scene, to meet his parents in a smart restaurant. If the film turns upon such contrary encounters, it does not stale, one feels for all those involved as much as one is entertained be their continual mishaps, not the least of which is a huge explosion and its concomitant, a crowded police-station cell. Capra was of course a master of the crowd scene in all its forms (already seen, for example, in Lost Horizon, as it would be in It's a Wonderful Life).

Here, eighty years on, is a very good time – and it brings to mind that Punch cartoon in which a solicitor at a desk reads from the will to the assembled company: “he says that he has taken it with him.”