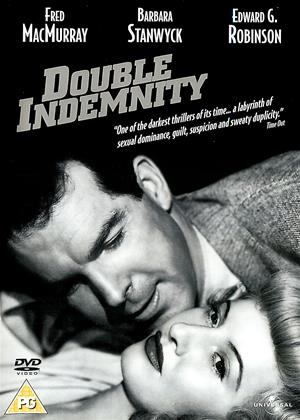 The DVD is rated at PG, the Blu-Ray is 5 minutes longer and is 15 rated. I am intrigued as to whether the edited 5 minutes are the reason for the difference. There is some indifferent kissing and possibly the most benign death by shooting I have ever seen in the Blu-ray version. Not really 15 stuff. The reason for heavy censoring in my opinion is the cruelly mercenary motivation of Phyllis Dietrichson brilliantly played by Barbara Stanwyck. The moral code of a praying mantis. I would not show any child this attitude to life for fear of lessons learned. This 1944 black and white American drama will not be to many people's taste. I am not at all surprised however that the previous reviews have been gushing. If this is a genre for you it is a truly classic film.

Insurance salesman Walter Neff (played by Fred MacMurray) has an affair with customer's attractive, murderous wife (Phyllis Dietrichson, played by Barbara Stanwyck). Together they plan to kill hubby and claim the insurance money – but suspicious claims investigator (Barton Keyes, played by Edward G. Robinson) smells a rat, and the unlucky Walter ends up with no woman, no money – and indeed, dead.

Film noir arrived as a complete genre with Double Indemnity. If noir was created at the junction of American pulp fiction and European film aesthetics, this could hardly have been more auspicious. It was written as a serial by former crime reporter James M. Cain from a real life murder case, and translated for the screen by hard boiled fiction's ultimate poet Raymond Chandler. Director Billy Wilder worked originally in Germany and the legendary composer of the dreamy orchestral score Miklós Rózsa went over to Hollywood on the same wave.

Such was the impact of Double Indemnity that it invented most of the motifs of noir and the closer a film adheres to its archetypes, the more noir it feels: the witty, pessimistic dialogue and narration; the angel-of-death femme fatale; the weak natured hero caught in the grip of an implacable destiny; the shadows and the neon soaked streets.

Most intensely Double Indemnity is a vehicle for Barbara Stanwyck's stunning, chilling performance as a psychopath and former killer who lies dormant in the LA suburbs until reanimated by Fred MacMurray's insurance salesman looking to dupe the system from within. It is a story about corruption and greed hidden in the hearts of ordinary seeming people, shielded from the sun of the blinding public gaze in the dusty shadows of American interiors.

There is a genuinely diseased heart to this film that remains a little horrifying. A sordid, corrupt sexuality made real by its unglamorous stars. Everyman Fred MacMurray, and Barbara Stanwyck in a cheap blonde wig. Edward G. Robinson's is sensational as the insurance investigator who knows something isn't legitimate. The cinematography of John F. Seitz is extremely dark and evocative. While I think Double Indemnity is flawless in every respect, it's Chandler's voice that makes it feel unique, whether its fabulous wisecracks, or explaining the nihilistic dreams of its doomed heroes.

Dearth of a salesman. - Double Indemnity review by RhysH

Walter Neff (Fred MacMurray) or should this be naff, an insurance salesman on a routine car insurance job falls for Phylis Dietrickson (Barbara Stanwyck) or was it just her ankles he fell for? He gets embroiled in a plot to kill her husband and claim "double indemnity" insurance.

This classic film noir has all the right credentials; director Billy Wilder who wrote the script with Raymond Chandler based on the novel by James M Cain. There was something missing, for me, was it the rather wooden performance from the main protagonists or the fact that their passion never really ignited? The secret meetings in a supermarket verged on the farcical.

It's worth watching for Edward G's performance, arm jabbing and pinched eyes.

Clever & intriguing storyline which keeps you interested .Well acted from everyone & the film holds up brilliantly for it's age. Rightly regarded as a classic & it didn't disappoint.

Great actors and story. Don't miss this one. - Double Indemnity review by ND

I completely agree with the reviewers previous, it is a shocking study in evil. Don't miss out on this, all three lead performances are outstanding. You're watching consumate professionals in action, most especially Edward G.