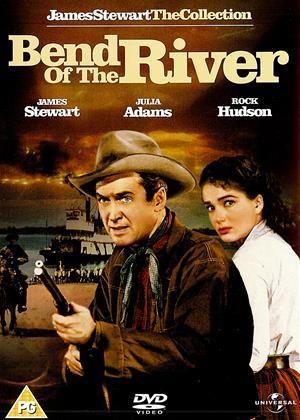 Reviews (1) of Bend of the River

With its modest budget, brisk running-time, and uncomplicated plot, this is in many ways a bog-standard early fifties western. What makes it stand out from the crowd is the willingness of director Anthony Mann to experiment with what were at the time surprisingly gritty themes prefiguring the spaghetti westerns of the next decade, and the superb lead performance of James Stewart.

Nowadays we mainly remember him as the hero of hideously sentimental Frank Capra films like "It's a Wonderful Life" - basically a marginally less dim and irritating Forrest Gump. This does a serious disservice to a very fine actor. Here we can sometimes see that side of him, but he uses it to express the social awkwardness of a good man who was brought up bad and doesn't quite know how to act around the nice folks he desperately wants to be accepted by. But when danger threatens, he easily passes the classic James Bond Test: do you believe this man would kill you? Yes, I believed that James Stewart would have killed me and enjoyed it, then been very guilty indeed about enjoying it, too late to give me much comfort.

If you've seen a few westerns, you'll be able to join the plot dots very early on. Two hard men with dubious pasts meet up, have some adventures, save each other's lives, and become close friends. Then they have to choose between doing the right thing because it's right, and doing the wrong thing because they'll get rich. They take different paths and end up as mortal enemies. The best example of this kind of film from this era is the superb "Vera Cruz", but there are many others. And you won't have much trouble figuring out that when the perpetually sneering Arthur Kennedy pops up three minutes in, he'll turn out to be very bad news indeed. What ties it all together is James Stewart struggling to be good while having to revisit the bad side of himself far more often than he wants to because people are shooting at him, which he portrays very well indeed.

On the minus side, it's a little rudimentary in places. Some of the fight scenes could have been better, not all of the actors are fit to be on the same strip of celluloid as James Stewart, and unfortunately there's Rock Hudson. The studio obviously insisted on throwing another big star into the mix at the last minute, therefore the movie got saddled with a major character who nobody, including the director, had the slightest idea what to do with, meaning that he's literally a waste of space most of the time, and at one point logically ought to die but doesn't because he's Rock Hudson. Oh, and if you're a stickler for political correctness, you might have problems with a certain black actor by the name of Stepin' Fetchit. Though to be fair, embarrassing though his thankfully limited screen-time is, the director seems to be going out of his way, albeit clumsily, to have the white actors treat a black man as an equal. It's even implied, if you watch this film from a modern perspective, that Mr. Fetchit and one of the white actors are a long-term gay couple, though I'm pretty sure that's accidental.