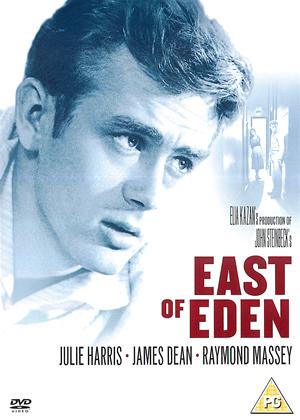 Reviews (2) of East of Eden

To get sent this disc of ‘bonus material’ as a separate choice just feels like a con. A complete waste of a film and we did not even consciously ask for this. Going straight back!

Kazan's version of John Steinbeck's epic 1952 novel only tells the last part of the story and simplifies what it does put on screen. It is a loose updating of the story of Cain and Abel in Genesis, which leans on the performance of its debuting star James Dean whose mannered, method inspired performance still works.

The part of the film that really captured the mood of the times was the generational schism between the introverted, maladjusted Caleb (Dean) and his domineering, righteous father Adam (Raymond Massey). Though with the early part of the novel cut out this relationship was hugely simplified. The search by the adolescent character for personal identity and freedom was a sensation for the first teenage generation of the fifties.

What most attracts now is Kazan's spacious, artistic rendition of the Salinas Valley in cinemascope. Visually, and with Dean's acting, the film feels like a big leap forward. It is a beautiful production. The colour and camera effects still look amazing. The period of rural California on the brink of World War I is superbly realised.

Sadly the film ends badly with Cal seeking and finding understanding from Adam on his stubborn father's death-bed, which negates everything else in the film. But, though the plot is a little overstuffed, it remains an unflagging, epic story about all the big biblical transgressions, of right and wrong and the sins of the father being visited on the sons. And the legend of James Dean is still alive in the only starring film released before his death.