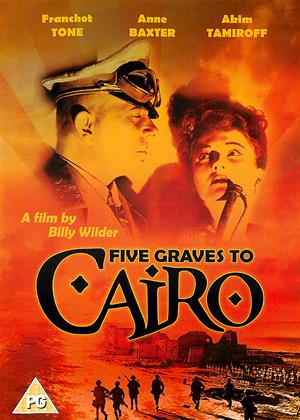 Reviews (2) of Five Graves to Cairo

"Avanti!" That cry, of inviting somebody to enter a room, provided the title for one of Billy Wilder's last films and was uttered throughout it by Jack Lemmon. It is uttered but once in Five Graves to Cairo (1943). Neither film is among Wilder's most widely known - but they deserve to be.

In both cases, his scripts developed, even transformed others' original work. In the case of Graves, this was a story by Lajos Biro twice filmed previously as Hotel Imperial. (Biro's script for Knight Without Armour is wonderful.) In all cases, the plot turns around a small hotel caught up in events where a border town finds itself between opposing armies.

The script by Wilder and Charles Brackett transplants this to somewhere in the Sahara, with an opening scene which suggests that a torrid drama is about to ensue. A tank rumbles (do tanks ever so anything else?) across the hilly desert sands, its throttle jammed on forward by a dead man's foot as somebody, apparently dead, falls from the back and turns out to be the dashing Franchot Tone. His accent is distinctly American, but, no matter, for he acquits himself well as a member of the British Forces, one who, moreover, worked in the Bank of England and sported a bowler hat before signing up.

All this he explains to a French maid, played with a mixture of the romantic and sinister by Anne Baxter, who has her own reasons for remaining with the hotel's owner after the German aircraft forced everybody else out the previous night. For all this opening drame, Graves is a film of interiors - brilliantly and darkly shot by John Seitz - and, this being Wilder, much banter which does not slow down the drama.

Although there are many who appear briefly and uncredited in the film, it is essentially a chamber work, turning around a few characters - something which, along with its humour, it has in common with Casablanca. That might make it small scale, but larger than life was Field-Marshall Rommel, played magnificently by Erich von Stroheim. Never has there been such a lunch as the one to which he invites some captured British officers and invites them to put twenty questions to him, which he partly answers by dint of salt and pepper pots. The performance is no caricature but, even in the midst of war, depicting the events of 1942, shows why he commanded a certain respect from both sides (and figured in the title of one of Spike Milligan's war memoirs).

What might be forgotten is that Rommel was one of those implicated in the plot to kill Hitler in 1944. What with the Field-Marshall's popularity among the Germans, Hitler realised that it was expedient to allow him to swallow a cyanide pill rather than be shot, and it all passed off as heart failure.

What one would like to know, however, is whether - one way or another - Rommel got to see this depiction of himself by brilliant émigrés on the West Coast. He would not have been displeased, and perhaps could have explained the assertion that he did not like a woman to bring him breakfast in bed.

War Tone - Five Graves to Cairo review by NO

Clever plot if a bit far fetched,but good film for that period.Glad it was in B&W ,more dramatic although ending pred ictable.I have seen

Tamiroff in many films & he always plays a good part.I did not realise that Franchot Tone had been in so many films ,but as they were

before my time ,I have not seen them.