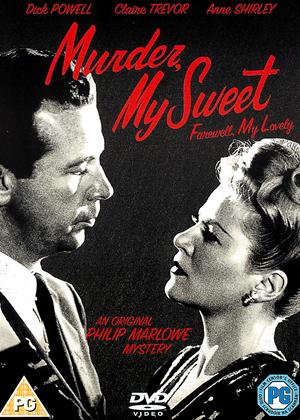 Reviews (2) of Murder, My Sweet

As early film noirs go, this one is pretty good. Unfortunately it's not quite as good as it might have been. Part of the problem is that extensive rewriting has taken place to reduce the amount of content considered too sordid under the absurdly restrictive Hays Code, so although the plot is basically the same as the source novel, sometimes murders are committed by different people, and some characters who die in the book don't, while others who didn't do.

This is in some ways a good thing. In particular, almost all the non-white characters have been removed, which is just as well because those bits of the book now come across as offensively racist, especially the numerous references to a Native American's foul body odour. On the downside, some characters' motivations get a bit muddled and confusing because they're now doing the same things for different reasons. In particular, the hero seems at one point to have suddenly gone over to the Dark Side and is willing to commit murder, as well as getting extremely confused about who he's supposed to be in love with, while another character witnesses something that isn't in the book and ought to be horribly traumatic, but apparently forgets all about it within hours.

Another unavoidable problem is that Humphrey Bogart will always be the definitive Philip Marlowe, and Dick Powell is no Bogart. Wisely, he brings a different interpretation to the character. He's more playful, occasionally making a bit of a fool of himself (though never to the extent that Elliot Gould did in "The Long Goodbye"), and not quite as confident, which is appropriate in a story where the hero is pumped so full of drugs that he goes temporarily insane and nearly dies. In scenes where he's in over his head and knows it, or physically in no shape to cope with anything, he's at his best, and his raw desperation is entirely believable. But he's not very charismatic, and it's hard to see why women find him so attractive, even if one of them is nowhere near as gorgeous as the script thinks she is. She's not the only odd bit of casting. The fake psychic Amthor should be both weirder and scarier, and the big guy playing the learning-disabled Moose Malloy isn't sure whether to go for tragedy or laughs. But it's a solid enough adaptation of one of the earlier and better Raymond Chandler novels, and it doesn't mess around like some Chandler films do, by never showing us the main character's face, or switching the action to the seventies or England. And it's not directed by Michael Winner.

An adaptation of Raymond Chandler's classic LA crime novel which had been made before as a B film in the Falcon series, but this RKO production is a different league. Hugely simplified from the labyrinthine source, though still complicated by normal standards, a surprising amount of Chandler survives translation, including a fair approximation of Chandler's hero Philip Marlowe.

Dick Powell was the first to play the sardonic, tough gumshoe, and he handles the comedy particularly well and tones down the dimplesome vitality of his crooning days. In his screen debut, giant ex- wrestler Mike Mazurki is memorable as Moose Malloy who strongarms Marlowe into looking for his former sweetheart, a vanished showgirl called Velma (as cute as lace pants), a pursuit that leads him to the blackmailing of wealthy LA aristocracy.

The big weakness of Farewell My Lovely is that so little of Chandler's vision of LA remains (the studio didn't go near a subplot involving the trading of drugs to Hollywood stars). Most of its strength is that so much else of the novel does. This includes a voice-over which transposes much of the writer's immortal narrative style and plenty of the trademark wisecracks.

Another bonus is the atmospheric photography of Harry Wild who paints the film with shadows, contrasting with the white costumes of Claire Trevor's glamorous femme fatale. Particularly memorable is the expressionistic descent into Marlowe's drug hell when being pumped to uncover what the PI knows about a series of jewel heists. The Hays Code was always an impediment for film noir and while the streets aren't all that mean, the film does delineate the class structure of the great sprawling west coast metropolis and the crazies and charlatans that feed on it.