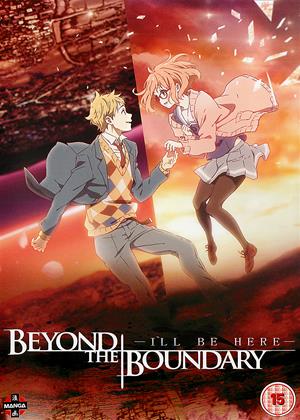 Synopsis:
Can anyone outrun their past forever? Mirai Kuriyama's ability to control and manipulate her blood, even to use it as a weapon, has left her an outcast and pariah. But a chance encounter with Akihito Kanbara, whose own lineage is only partially human and allows him to heal from almost any injury, may have finally given her a chance at finding peace.
When the cost of that path becomes apparent, will the two of them be willing to pay the price for a true happy ending? Even if it's achieved, how long can it last in a world where Mirai's mere existence is seen as a lethal threat? In two spectacular feature films, the world created in the hit series is taken to its epic, stunning conclusion: Beyond the Boundary Movie: I'll Be Here -: Past and Beyond the Boundary Movie: I'll Be Here -: Future'.
Directors:
Taichi Ishidate
Producers:
Shinichi Nakamura, Nagaharu Ohashi, Shigeru Saitô, Gô Tanaka
Voiced By:
Risa Taneda, Kenn, Minori Chihara, Tatsuhisa Suzuki, Ayako Kawasumi, Masaya Matsukaze, Akeno Watanabe, Naomi Shindô, Yuri Yamaoka, Moe Toyota, Hiromi Konno, Emi Shinohara, Mei Tanaka, Yôko Hikasa, Michiko Kaiden, Seiichiro Yamashita, Masayoshi Sugawara, Takahiro Fujiwara
Writers:
Nagomu Torii, Jukki Hanada
Aka:
Kyôkai no Kanata: mirai-hen / Kyôkai no Kanata: kako-hen
Studio:
Manga Entertainment
Genres:
Anime & Animation
Countries:
Japan

Sign up
Aesthetica of a Rogue Hero: The Complete Series

Reviews of Beyond the Boundary: The Movie

So, with that being out of the way, let’s begin.

As said, Beyond the Boundary: The Movie starts one year after the events in the TV show had wrapped up. Now, Izumi has gone missing (or at least, has been omitted from the forthcoming events), and now all eyes are pointed at her brother named Hiroomi. Hiroomi has a daunting task: he must assume control of the Nase clan and take responsibility for repelling the evil forces of Youmu from his home city. As conflict slowly brews in the background, the immortal hybrid Akihito Kanbara, together with summoner Mitsuki Nase are left in charge of the literary club in the Academy. The club has dwindled in size, because their former club member Mirai Kuriyama is now suffering from a strange case of amnesia. Here, if you haven’t watched the recap film of the same anime, you’ll be also in for some juicy memory loss (the original show aired four years ago, so it’s probably a good idea to recap some key events from the past. But I digress).

Then comes the relationship dynamic between Akihito and Mirai, where both of them feel as if the other side should make the first move after the separation way back. Problem is, Mirai cannot remember anything about her past with Akihito, which makes the guy’s job that much harder to begin with. But, with all of that buried somewhere in the back of Mirai’s mind (the whole thing about her being a superhuman and carrying a cursed blood within her body), she can finally enjoy her school years as it was meant to be. Soon however, she gets attacked by a mysterious hooded person who puppeteers seemingly impossible-to-kill acolytes. These acolytes are too weak to be Youmu, but nonetheless they seem to have a basic level of intellect which puts under question the whole thing about them being puppets earlier. Whatever’s the case, Akihito will have a tough job dealing with all of that whilst maintaining his interest towards Mirai afloat.

As you can see, the whole offering requires you to remember the events as they unraveled from the show. If you DO however remember, then Beyond the Boundary: The Movie is simply a blast to watch.