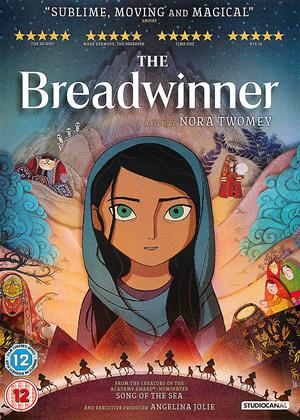 Synopsis:
"The Breadwinner" tells the story of Parvana, an 11-year-old girl growing up under the Taliban in Afghanistan in 2001. When her father is wrongfully arrested, Parvana disguises herself as a boy in order to support her family. With dauntless perseverance, Parvana draws strength from the stories her father told her, and ultimately risks her life to discover if he is still alive. Equal parts thrilling and spellbinding, The Breadwinner is a timely and inspiring tale about the transcendent power of stories, and their potential to unite and heal us all.
Directors:
Nora Twomey
Voiced By:
Saara Chaudry, Laara Sadiq, Shaista Latif, Ali Badshah, Noorin Gulamgaus, Kawa Ada, Soma Chhaya, Ali Kazmi, Kanza Feris, Kane Mahon, Reza Sholeh, Mran Volkhard
Writers:
Anita Doron, Deborah Ellis
Others:
Anthony Leo
Studio:
StudioCanal
Genres:
Anime & Animation, Children & Family

Reviews (3) of The Breadwinner

wonderful - The Breadwinner review by JB

this film was highly praised by Mark Kermode and he was 100% right. it is so well done and tells a true story , I loved it, wonderful and inspiring!!

Not for me - The Breadwinner review by BE

I am not usually a lover of animated movies but hired this as it was very highly recommended. I am afraid it lived down to my expectations and I did not enjoy it!

Engaging and informative. Thought-provoking and beautifully portrayed - The Breadwinner review by RW

This animation caught my eye as I was recommended it having watched a lot of Studio Ghibli films and animated films not necessarily aimed at a younger audience. This story is certainly not one for a younger audience but I think the 12 rating is probably accurate.

It is a tough story to watch played out, but it is brilliantly interwoven with a relevant folk tale speaking of the value of stories and culture as well as kindness in the face of anger/fear. I would heartily recommend if you're interested in a relatively easy entry into the topic of the Taliban in Afghanistan.

Let us take a moment to truly appreciate the age we live in where technology has advanced enough that animated films are capable of far more than the standard commercial appeal from the most expected regions of the world. The Breadwinner is a shining example of animation’s potential to tell stories that are cultural, truthful, inspirational, and even deeply tragic. Could a film such as this had been made in live-action? Absolutely but seeing it as an animated film gives it a certain gravitas for being more astounding in its visual splendor amid a tough historical story.

It’s 2001 and Afghanistan is a very chaotic place to be living. Parvana is an 11-year-old girl of her village and finds herself increasingly frustrated with the rules and tensions of the area under Taliban rule. Namely, she despises the rule of not being allowed outside without her father escorting her across the market. Her father is a good man but a good nature means little to the rash and violent Taliban. Soon, he is arrested and Parvana’s household is left without a man to go out and get food. With the Taliban offering no help and her home desperate for food with her mother and two siblings starving, Parvana takes the ultimate risk by dressing up as a boy and venturing to market, shirking her hair and dress for a boy’s outfit.

She’s astounded by how much differently the world treats her as a boy, where she can easily get everything she needs from the market without much fuss. She befriends a boy who she plays with when she gets a shot. She receives less harassment from the pushy Taliban, despite the organization being tight-lipped about her father. While keeping her family fed, she struggles to maintain her persistence by telling her younger sibling mythical stories of great heroes, hoping she can shape up to be just as bold as the region descends into chaos.

The Breadwinner has an exaggerated style that isn’t entirely uncommon for more festival-friendly animation but still used well with great fluidity and color. I loved the variation in styles where Parvana’s reality carries a degree of smooth and angular designs while her imagination of heroes and villains is presented more in a flat storybook format of textures and tweens. The distinction and vivid nature brings a freshness and bold artistic rendering that never feels like it overshadows the more human aspects of this tale. The simplicity of the design also contributes to the relatable nature that it may perhaps be a better sell for audiences not too keen on a more live-action production telling such a tough story.

Director Nora Twomey has done an astounding job of crafting an animated film that we desperately need more of in this world. No major slam against fantastical adventures or even silly musicals born from the major studios but animation is capable of so much more. It’s a medium that can be used to tell anything from a childish escape of great slapstick to a deeply human story of tragedy, culture, and even politics. Twomey belongs in that noble category of animation directors who are taking this method of filmmaking to the most important of realms with the strongest of storytelling. Though I have my quibbles where I feel the film diverges slightly down less impressive scenes, it remains a film more notable for what it strives to achieve and we desperately need more of. All I can say to Nora is “more, please.”