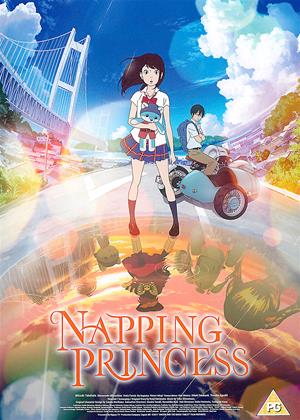 Synopsis:
Kokone should be diligently studying for her university entrance exams, but she just can't seem to stay awake. Aside from stealing precious study time, her napping is even more distracting, as it brings on strange dreams with warring machines that hint at family secrets that have been dormant for years. She can't ask her father, a hipster mechanic more talented and artful than his job requires, as he's always busy modifying motorcycles and cars in flights of fancy. What are these visions that lead Kokone at once closer to and farther away from her family?
Directors:
Kenji Kamiyama
Producers:
Naoki Iwasa, Yoshiki Sakurai
Voiced By:
Mitsuki Takahata, Shin'nosuke Mitsushima, Yôsuke Eguchi, Doug Erholtz, Arata Furuta, Rie Kugimiya, Tomoya Maeno, Chris Niosi, Colleen O'Shaughnessey, Brina Palencia, Michael Schneider, Risa Shimizu, Wataru Takagi, Hideki Takahashi, Lex Wutas
Writers:
Kenji Kamiyama
Aka:
Hirune-hime: Shiranai watashi no monogatari / Ancien and the Magic Tablet
Studio:
Anime Ltd
Genres:
Anime & Animation
Countries:
Japan

Will's Rented
98 films by will

I’ve been spoiled over the past few years with brilliant slice-of-life anime that I nearly forgot what the more frantic and fantastical anime the medium was most known for. All the cliches of giant robots, magical powers, fuzzy animal mascots, and imaginary kingdoms seemed so quaint compared to the likes of such stellar films as A Silent Voice or In This Corner of the World. Napping Princess attempts to find a strange balance between the two in a troubling tightrope walk of the surreal that spends more time succumbing to the weight of its weird than pulling off a graceful act.

I did initially dig the twisting of perceptions within the first few minutes of the film. We’re introduced to a sci-fi kingdom where a futuristic populace works for a king to build robots. The king’s daughter is a magical princess that has unimaginable powers to bring stuffed toys to life and cause havoc with her abilities. Naturally, his stuffed toy of a bear talks to her and she wears a goofy futuristic outfit built for cosplay purposes. Then she goes to sleep and wakes up as the Japanese high schooler Kokone. Was it all a dream or is it a premonition? That’s a mystery I wish were left more aloof.

In the real world, the girl is Kokone and she lives with her single father, Momotaro, who is struggling to pay the bills as a mechanic. He has the classic Robin Hood problem of using his mech and tech skills to build self-driving cars for the elderly to get them where they’re going, asking for very little in return. Gruff and troublesome, he attracts the attention of some business goons and law enforcement, targeting him for the theft of an electronic tablet with a very peculiar application. What’s so special about it? Kokone aims to find the truth with the help of her childhood pal Morio.

Napping Princess makes the mistake of bleeding the mysterious and the fantastical too close together, making a more blatant connection between the two worlds which is far more underwhelming than it should be. I suppose that the cramming of these two realities together might make for a unique surreal showcase but this tactic sadly reveals more of the flaws within each tale. The reality-based story that mixes corporate espionage with hidden tech and a secret history comes off more like a light-hearted farce than an intriguingly complex story, complete with a goofy soundtrack for when corporate goons bumble around Kokone’s home. The film really embodies the atmosphere of a direct-to-video teen farce when the home invasion comes complete with such lines as “you idiot, that’s a whiteboard, not a tablet!”

The real world is at least more engaging than the fantastical one, cobbled together from familiar and tired elements of giant robots, lava monsters, wizards, and colorfully dressed rogues and royalty. The parallels between the two world seem to be posed as blatant early so the film can lavish more in its design than its narrative cohesion. The whole experience just feels like a MacGuffin adventure in a contemporary setting with a magical glaze slathered on thick.

Director Kenji Kamiyama has a history of directing on such intricate and elaborate series such as Ghost in the Shell: Stand Alone Complex and his devotion to detail is certainly present here. Both aspects of modern-day Japan and the fantasy land of robots feels fully realized to little details, including exercise bikes used for controlling robots. But for all that detail, the film only comes off as competently pretty more than cohesively enjoyable on a narrative level. The best that can be said is that it embodies a sense of imagination akin to The NeverEnding Story, baggaged with too much bleeding of realities.