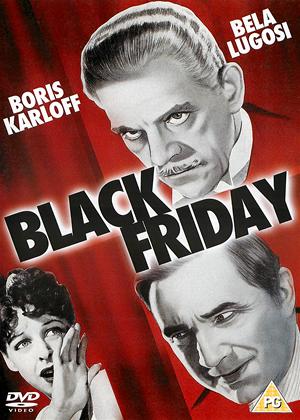 I'm in two minds about it... - Black Friday review by Count Otto Black

This very minor B-movie is billed as co-starring those mighty horror heavyweights Karloff and Lugosi, but the best acting comes from the utterly obscure Stanley Ridges as the gentle, absent-minded professor of English literature who has to share a skull with what's left of a psychopathic gangster. Ridges is very good as the mild-mannered academic who begins to transform more and more frequently into a ruthless killer, and it's his performance that carries most of the movie. Unlike Dr. Jekyll, it's not his own fault that he winds up with an evil alter ego, and he doesn't even know he literally has part of somebody else in his head, so he truly is an innocent victim, which makes Karloff's treatment of him all the more horrendous.

Karloff is, as he so often was, the mad scientist who supposedly means well and is only doing Very Bad Things for the good of humanity. The trouble is, unlike Ridges, he doesn't convincingly put across the two sides of his character. The first chance he gets, he murders a bad man to save a good man who also happens to be his best friend and needs spare part brain surgery right away - not exactly ideal behaviour for a doctor, but we can understand his motives. But the moment he finds out there's a fortune in stolen money out there somewhere, he's trying his hardest to revive whatever remains of a dead killer's personality in his bewildered friend's head because think of all the good he can do for humanity with his shiny new mad brain science laboratory! And so what if his helpless, trusting best buddy turns into a schizoid murder for a while? Hopefully not too many people will die before he finds the money, and then Boris can turn his pal back into a harmless poetry professor again. Probably.

Karloff has considerable screen presence because he's Karloff, but he neither tries very hard to convince us that he's a good man who got tragically carried away by his zeal to cure cancer or something, or goes over the top as an unashamed baddie who seizes every opportunity to do illegal weird operations, and if they happen to involve turning his best friend into a psycho killer that's just the way the cookie crumbles. By not going far enough in either direction, he ends up looking like a selfish hypocrite who simply wants the money, and that's not terribly interesting.

As for poor old Bela, despite being second-billed, he's barely in the movie! Anyone who thinks Ed Wood exploited him should watch this film. He gets as wet, cold and bedraggled as he ever did in "Bride Of The Monster", and he's treated with about one-hundredth of the respect Wood gave him. No wonder he tried so much harder in those desperately threadbare final films than he does here. He must have known how bad they were; but he also knew when he was appreciated and when he wasn't.

This film really deserves two and a half stars at best, because Karloff isn't trying very hard, and Lugosi isn't trying at all. Not that it matters, since he's wasted in a nothing part just so they could put his name on the poster. But Stanley Ridges gives it everything he's got, and considering the director expected him to be the scariest thing in a movie where he was third-billed after Karloff and Lugosi, he deserves full credit for a performance which would have made this a classic B-movie if his more famous co-stars had been as committed to doing their job as he was.