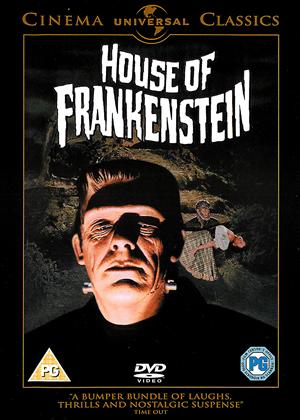 Reviews (1) of House of Frankenstein

Since the 1931 original, Frankenstein’s Monster had lurched his way through four sequels before this, the last of which teamed him up with The Wolf Man in 1942. As a result of the healthy revenue this idea generated, Universal films decided to upgrade the theme and involve Count Dracula too, in their following team-up. Artistically, it was clearly the beginning of the end of these monster films – but while there was money to be made, the studio was quite content to continue.

Here, lean John Carradine played the Count – suave and cultured. It isn’t quite clear why Bela Lugosi wasn’t involved, but I have read he was considered too ‘old’ … to play a centuries old vampire. Carradine brings a cadaverous charm to the role, but is featured only briefly before being reduced to a skeleton by the inevitable dawn (in his final scenes, half his moustache is missing – possibly a side effect of the encroaching daylight!).

Boris Karloff returns to the series, this time to play mad old Doctor Neimann, who plans to kill the various men who found him guilty of his many crimes – just as Ygor had done in ‘Son of Frankenstein’ five years earlier. It is revealed that Neimann’s brother assisted Frankenstein in his original experiments. Whilst no-one is, at this stage, too concerned with continuity, that would indicate his brother was Fritz from the original film, played by Dwight Frye.

My favourite character in this, however, is the sympathetic Daniel, a hunchback, played by J. Carrol Naish, who falls in love with gypsy lass Ilonka (Elena Verdugo) – but she has designs on Larry Talbot (Lon Chaney jr). I find Ilonka’s tactlessness AD 1972irritating. She can’t understand why Daniel does not enjoying hearing her stories of how she loves the erstwhile Wolfman, and gets quite tetchy about it.

“What’s the matter, Daniel - don’t you like Larry?” she asks, exasperated, wilfully blind to the hunchback’s hopeless love for her.

And so the pecking order continues. No-one cares about Daniel, so he in turn takes his frustrations out on the one character lower on the scale than himself – the mostly comatose Frankenstein Monster. Forever strapped to a laboratory table, this now thankless role is played by a newcomer to the series Glenn Strange. Strange is the only actor besides Karloff who was chosen for what he could bring to the Monster, as opposed to being a ‘name’, and his powerful frame and wonderfully craggy face lend themselves very impressively to Jack Pierce’s make-up. Apparently Karloff himself coached Strange on set as to how to move like the Monster. Such a shame the story didn’t allow him much to do other than drag Niemann into a bog full of quicksand. I would have loved to see Strange play the role in a story more worthy of him.