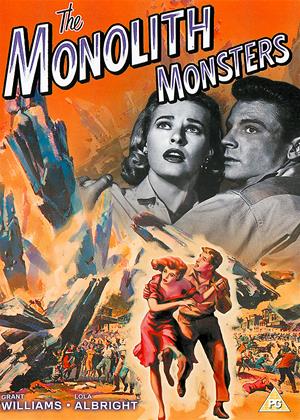 Reviews (1) of The Monolith Monsters

This is a workmanlike but very minor sci-fi B-movie about a meteorite which, like the Blob in the movie of that name, has the ability to constantly grow, and thus threatens mankind, suffers from one insurmountable problem. Its "monsters" are lumps of rock. Not living rock that can run after you or anything like that. Just odd-looking geology which kills people who get too near it because it's highly toxic (by the way, despite what it says on the previous page, nobody turns to stone from fear - why would that happen?), and threatens a whole town because as it grows, it topples onto anything downhill from it.

So what we have is a very slow-moving "monster" which, once everybody catches on that it might give them a fatal space disease, poses no threat to anyone who isn't directly in front of it and unable to move out of the way within an hour or two. And since it completely lacks both the desire and the ability to do anything on purpose, it's not really all that menacing. With a monster this underwhelming, the film desperately needs some interesting characters, and it doesn't have those either. There's a handsome guy and his pretty gal, another handsome guy, an older man, a little girl in peril - the usual crowd.

Worst of all, these fearsome rampaging space crystals never actually trap or surround anybody. The nearest they come to directly posing a threat to anyone apart from the tiny handful of people who perish almost instantly is to infect a couple of characters with a "petrifying" illness that seems to lowly turn them into leather, and they'll die unless they get an injection in time. Other than the vague and much too abstract threat of these naughty boulders multiplying infinitely and covering the whole world if the hero's plan fails, the nail-biting danger he faces at the film's thrilling climax is that what he's about to do might be illegal unless he can get the governor's permission, and the governor's gone to lunch or something. Can you stand the suspense?

Altogether a rather dull thriller which fails to thrill, in which there's far more talk about geology and footage of men looking tense while dripping various substances on small rocks than anything resembling action. Much less fun than similar movies in which the monster has legs with which to run after the hero, and fangs with which to eat him when it catches up.