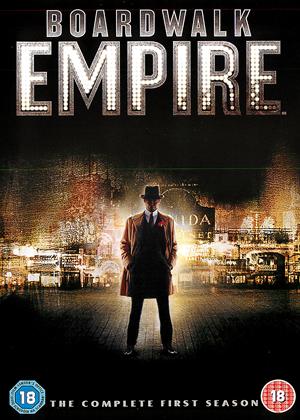 Boardwalk empire (I am only two episodes in) provides an interesting view of “the slippery slope” - “honest” graft that goes bad with the participants being dragged deeper and deeper into the mire. Fine performances, wonderful sets and (CGI generated) background. Highly recommended - so far.

Boardwalk Empire is the epic HBO period drama by ex-Sopranos writer Terence Winter and stars a veritable feast of names from both Hollywood and the UK. The pilot, directed by none other than Martin Scorsese sets the scene brilliantly as we meet Enoch "Nucky" Thompson (Steve Buscemi) the treasurer elect of Atlantic City council. At first Nucky seems like a straightforward and straight-laced man who has a genuine interest in the wellbeing of his community. It very quickly becomes apparent however that there is far more to Nucky and the running of Atlantic City than first meets the eye.

Not that this twist is surprising, if anyone says to you “America in the 1920’s” you immediately think prohibition and gangsters, they are the iconic staples of nostalgia for the era, and Boardwalk Empire plays up to those in spades.

It’s not camp or false though, the corruption and deceit are played totally and sometimes uncomfortably upfront, whilst the stereotypical Italian gangsters are played completely straight-faced; and it works, it works very well in fact.

Boardwalk Empire is one of the most intelligent, surprising and adult dramas of the last few years, giving serious rivalry to its period drama competitor Mad Men. It is sleek and sophisticated and utterly gripping, although things can get a little bit complicated at times the season takes its time with investigating and digesting complex stories, never leaving you far behind. The cast are all excellent, whilst the setting is almost romantically nostalgic, once you get past all the Tommy guns and bootleg booze.