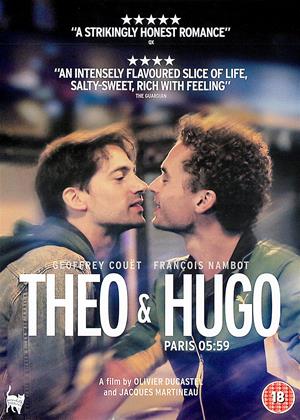 Reviews of Theo and Hugo

Theo and Hugo, directed by Olivier Ducastel and Jacques Martineau is a story about two men who come together in the most unusual of circumstances, and despite all odds, still manage to elevate their relationship on the next level whilst keeping their cool and going against the grain. The film itself is a mediocre love story that doesn’t offer anything new we haven’t seen in the recent gay genre as of now. The effort is clearly there, but as a finished product, Theo and Hugo lacks polish, a solid screenplay and a story that would provide entertainment past the shock factor that is sex.

The film stars Geoffrey Couët as the sassy, always demanding Théo Daumier who crosses paths with Hugo (François Nambot). Hugo is the Théo’s polar opposite, and, if it couldn’t be more obvious – the two opposites attract more than they repel. So, after a night spent together, both of them start re-evaluating their moral choices that lead them to become where they are in life. And they both struggle to achieve peace of soul.

As we follow Théo through his trials and tribulations, one cannot help but feel pity for his rose-colored glasses that seem to romanticize everything his vision stumbles upon. Ultimately, his character breaks under pressure when confronted by both his nemesis and his lover Hugo, which proves to be the reverse Achilles heel that would wake up Théo from his slumber. The story continues in the same fashion, except it transcends by showing off the underground gay scene in and around Paris. This time, we don’t have the luxury to accept the Eiffel Tower’s beauty for what it is.

In regards to story, that’s pretty much it. The rest of Theo and Hugo is filled with explicit sexual scenes for the sake of it (a large orgy at the sole beginning that serves no storytelling purpose whatsoever), brief encounters that lead directly under the sheets and overly sexualized dialogue that, again, conjures an overture toward the pounding. The sets are neither grandiose, nor filthy. The magic of Paris is nowhere to be seen – it’s just an everyday occurrence for the people inhabiting it. Is the setting just a backdrop and nothing more? Possibly. But then again, not all French flicks are supposed to fall on either side on the French hype spectrum.

Theo and Hugo relies mostly on explicitness to cover that which it lacks: a proper story and reliable motivations under which our characters will operate. Sure, they sometimes (mostly accidentally) care to think before they act, but most of the times just go through the motions without thinking twice in regards to their current predicament.

As it stands, Theo and Hugo is the mediocre gay experience of the day.