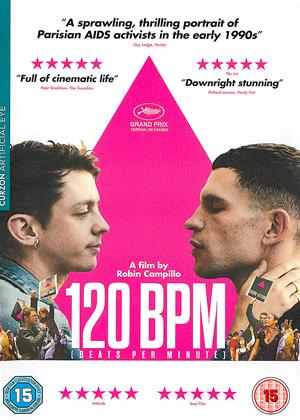 From the political to the personal all aspects of the appalling treatment of aids and its consequences are movingly portrayed. Courage, anger, humour, love, passion, indifference and bewilderment are all here and all expertly communicated by a young cast. From the brilliant portrayal of activist meetings through the set piece demonstrations to the heart rending portrayal of personal loss we were totally engrossed.

Fascinating film covering the initial responses to the AIDS epidemic in Paris and how the community got together to fight the system to get answers, expose issues, make people be aware of what was going on and at the same time explore the relationships, friendships that developed through it. Having lived through the period I found it very thought provoking, opened my eyes to issues that I was not fully aware off and how a community came together to fight the cause! If the period interests you a film not to be missed.

from the time of this film when AIDS was seen as a scourge and people were ostracised for having the illness and action groups were having to fight officialdom to get any help etc from them for those so unfortunate to have the illness.  In the changed times of today it was good to be reminded of what people had to fight for to get to where we are today!

This started poorly, I thought - no spoilers but to be honest I almost turned it off at this point. Glad I didn't as the drama and characters develop well telling a story I didn't know.

No exact dates given but it seems like the late 80s - the Mitterand years in France anyway when, shockingly, it seems the French rates of HIV/AIDS were double what they were in the UK and Germany. This is no doubt because, despite all the avant-garde posturing smoking Galloise in dark cafes discussing Jean-Paul Satre and Simone Beauvoir, France is really a deeply conservative place (women got the vote way later than in the UK). It is in essence still a rural and southern European country with Catholic values, despite a secular state school system.

Of course, Paris is not France, as any French person will tell you. This is set in Paris.

Anyway, all interesting and some superb scenes using special effects in a nightclub (no spoilers).

At first I thought the third act was extraneous and unnecessary, but as it went on I realised it is what makes really this film. No US movie or UK TV drama probably would dare to do this. So BRAVO!

Reminds me a bit of the best film ever made about drug addiction (forget Trainspotting nonsense). 'Oslo 31, August 2011'.

4 stars. Would be 5 if the very many word political meeting scenes were cut down. Some flab needs losing there.

This film is not in any way a sanitised or glamourised portrayal of the Gay community in Paris reaction to the sudden and fatal devastation wreaked by AIDS.  The spirit and organisation of the Gay community is in stark juxtaposition with official indifference and denial of what in mid 80's France was still seen as a minority disease.  The almost documentary style is so unsettling in the way it captures the desperation, resignation and despair of these times.  The realistic, unflinching portrayal of the raw horrific physical reality of AIDS is hard to watch even decades later. The story is interwoven with the sincere and moving journey of love towards death from aids and then beyond which give just a glimmer of hope.  The personal, emotional political themes seamlessly merge in this hard to watch but powerful film.   In early 2021the many themes suddenly seem universally more relevant indeed prescient.

The Blu Ray has only one option for English subtitles, which is audio described for hard of hearing - this made it too annoying to watch so I can't review the film itself - will have to wait for it to turn up on TV.

Given how much content you can fit on a Blu Ray I can't understand why they didn't include regular subtitles as well.

It’d be far too easy to reap easy tears and melodrama from the protests of ACT UP in Paris of the gay community against the restrictive and demonizing government response of the AIDS epidemic. But here is a film that doesn’t aim so low with its story of the uphill battle in the 1990s. It doesn’t give us a mushy sensation of hope for the future but embodies us within the dire scenario, evoking all the pain and passion for the plight of the gay community being treated as second-class citizens.

The various ACT UP members are given a genuine personality that erupts with great fury. We meet them at ACT UP meetings of classrooms, a forum where the many affected bicker and banter about what to do next as the clock is ticking for many of them. Then there are the more quiet and sexual scenes between the gay men of the group, paid with close attention and ample focus in the hazy darkness of concealing their love. These two tones of the ACT UP group presents more three-dimensional characters than merely civil right crusaders of traits more heroically wrapped in ambition rather than bound by troubling lives. Such lives are hard to maintain as you watch your friends and lover perish around you, with the world seeming to care little for your situation.

Thibault (Antoine Reinartz) is presented as the leader of ACT UP, staging their protests and struggling to maintain common ground in a group that seems to not only disagree on their tactics but feud about smoking during meetings. Sophie (Adèle Haenel) tries to bring new ideas into the mix. Max (Félix Maritaud) takes the lead on concocting props for protests, including fake blood. Sean (Nahuel Pérez Biscayart) finds himself full of ideas as well as a love for the newest member of the group, Nathan (Arnaud Valois). Romance blooms with aspects of eroticism, drama, and tragedy as two souls fight to maintain love in a society that would rather such affection be shut out.

Director Robin Campillo doesn’t want to shut out any of this story, keeping in every challenging and heartbreaking aspect. We don’t just hear about characters dying off-screen; we watch them slowly drift away in situations that linger long after, haunting the viewer with how one could continue living when so many forces seem to be against you. We just don’t hear of the gay romances taking place behind closed doors; we follow them in and watch that sexuality take hold and form a bond in the ambiance of revolution and a desire to fight on another day. The relationship between Sean and Nathan is anything but simple, showcasing a complicated series of feelings that leads to distrust and questioning of just how far they’re willing to take this romance.

120 BPM runs exceptionally long at 140 minutes but warrants every minute as we keep our eyes and ears fixated on the struggling. We get to know and love these characters as relatable people all the more to see just how much Big Pharma and the government has damaged their lives. If we only took heed, we could see people and not just some othering by the homophobic and stuffy suits who chose to ignore a real problem. Maybe we haven’t come very far since, but this film lets us know that the protesters were not just angry young people protesting for the sake of protesting. They had cause for anger and concern in a society that would rather tone police than listen. Perhaps we will listen after the fact, one hopes.