Rent Buddha Collapsed Out of Shame (2008) 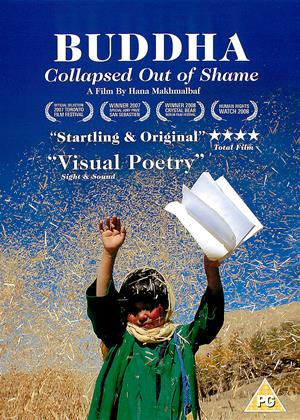 Synopsis:
A poetic look at how violence and tragedy shape the lives and minds of children, from Iranian director Hana Makhmalbaf, daughter of acclaimed director Mohsen, sister of Samira and at 19 the youngest of the remarkable clan, with this her second feature. Buddha Collapsed Out of Shame. Set in the Afghan town of Bamian, amidst the rubble of the massive slates of Buddha blown up by the Taliban in 2001, the film follows the trails of a little girl who want to go to the school for girls across the river from her home. The everyday obstacles she faces turn this small ambition into an epic struggle, with unexpected emotional and political resonance.
The film is a deeply political allegory of the impossible situation facing girls and women in Afghanistan today. Intimately told from a child's perspective, including a world of make-believe that is both exhilarating and terrifying, the film follows six-year-old Bakhtay, who decides she will at all costs go to school. She sets out on an odysseys that pits this endearingly obstinate girl against numerous, seemingly insurmountable obstacles - including, most ominously, a band of boys pretending to be the Taliban, as the conflict spills out onto the playground.
Actors:
Abbas Alijome, Abdolali Hoseinali, Nikbakht Noruz
Directors:
Hana Makhmalbaf
Writers:
Marzieh Makhmalbaf
Studio:
Slin
Genres:
Drama
Countries:
Iran

Rent other films like Buddha Collapsed Out of Shame

Reviews (1) of Buddha Collapsed Out of Shame

There is a scene in this astonishing film which will haunt the memory for many moons to come. A girl is in a pit, we see what she sees, looking up through the eyeholes of a hood. A group of boys stand around like evil hours of a clock, holding stones. She has to be punished for wanting an education, and carrying lipstick (to be used as a substitute for an unaffordable pencil). It may be child's play - to the boys - but we see the terror a genuine victim must experience.

But the greatness of the film is that it shows the boys, playing at being the Taliban, are victims too. Brought up to believe in violence and inequality, they turn the paper of the girl's notebook into a swarm of floating planes. War(planes) instead of school. Division (girls cannot be educated with boys) instead of unity.

The acting from the children is as natural as the air - no self-conscious Hollywood starlet with dollar signs in their eyes here. And the photography is breathtaking.

The girl, Bakhtay, is one of those children we see so often in Iranian cinema. She has a goal - to go to school and learn to read 'funny stories', and the camera follows the journey. Familiar, maybe, but film-makers like Mohsen and Samira Makhmalbaf, Marziyeh Meshkini, Jafar Panahi, Majid Majidi, Asghar Farhadi, and others, rarely fail to create something immeasurably rewarding out of it. With 'Buddha Collapsed Out Of Shame' a 19 year old Hana Makhmalbaf joined the elite.