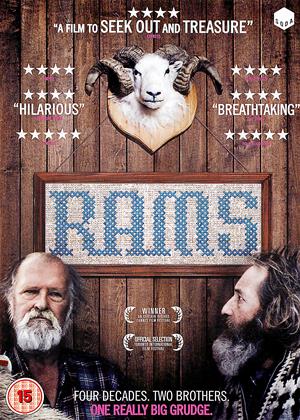 Synopsis:
In a secluded valley in Iceland, brothers Gummi and Kiddi live side by side, tending to their prized ancestral sheep. But a long-term grudge means that they haven't spoken to each other for four decades, passing messages via the sheep dog. When a lethal ovine disease suddenly appears in the valley, the authorities move in to cull all of the livestock. But Gummi and Kiddi don't give up easily and each brother tries to stave off the disaster in his own fashion: Kiddi by using his rifle, and Gummi by using his wits. As the authorities close in the brothers will need to come together to save the sheep - and themselves - from extinction.
Actors:
Sigurður Sigurjónsson, Theodór Júlíusson, Charlotte Bøving, Jon Benonysson, Gunnar Jónsson, Þorleifur Einarsson, Sveinn Ólafur Gunnarsson, Ingrid Jónsdóttir, Jörundur Ragnarsson, Viktor Már Bjarnason, Ólafur Ólafsson, Jenný Lára Arnórsdóttir, Guðrún Sveinbjörnsdóttir, Þorsteinn Gunnar Bjarnason, Anna Sæunn Ólafsdóttir, Sigurlína Tryggvadóttir
Directors:
Grímur Hákonarson
Producers:
Grímar Jónsson
Writers:
Grímur Hákonarson
Aka:
Hrútar
Studio:
Soda Pictures
Genres:
Drama
Countries:
Iceland, Top 100 Films, Drama
Awards:

The bleak backdrop of Iceland had its own beauty, rather like the relationship between the two brothers, who lived side by side but hadn't spoken to each other for 30 years. There was an understated humour which we found appealing and the characterisation and plot built in a way that kept us involved throughout.

The acting was superb.

If you like small independent films that are as far removed from Hollywood as possible, see this film.

Had I knew what the film was about before sitting down to watch it, I would have gone down the pub, however I'm glad I did watch it. Superb story, acting and cinematography. Humorous (subtle and not "laugh out loud"), but also dark and poignant. Please take a punt and watch it, unless your favourite film is "Dude, where's my car?".

Beautiful landscapes and sheep based drama, what more could you want. - Rams review by DerekW

Beautiful landscapes and sheep based drama, what more could you want.

Well, if this is a 'comedy', I'm a Greenland shark! Not one laugh from this little film about 2 squabbling brothers.

It's basically all set in irredeemably bleak Iceland (this is the 2nd Icelandic film I have seen - the first, 'Of Horses and Men' was equally dour and bleak, but better overall).

And it's all about sheep and scrapie, with flocks being destroyed etc.

I like little independent films and would like to give it more, but even at its short length, I was clock-watching after the half-way point. So 2 stars.

Left me ice cold! - Rams review by BE

I generally enjoy movies that are different from the norm - but not this one. I should like to know who classed it as a comedy as I found it bleak and depressing beyond words. Animal lovers also need to be warned that there are some very upsetting scenes in it. Extremely disappointing movie with no redeeming qualities.

This is a comedy? - Rams review by RS

"Twelve Years A Slave" had more laughs than this. The film is slow and bleak, and has little dialogue. It is interesting as an insight into rural Iceland, but as with many independent films, it seems to run out of plot before the end. At least you can surf the web whilst watching it and not miss anything!

The story is partly based on true story of 2 estranged brothers who were sheepherders in a small remote village in Iceland. It was filmed with a very limited budget and produced a much richer and important lim that most ridiculously expensive schlock coming out of Hollywood. This is a sad and distressing movie about determination, hard work, pride, redemption and love. A movie to think about for a long time afterwards. There are some funny moments but it is a serious drama. Curious short story film called Wrestling included with the extras.

A very different set of cinematic characters - Including the sheep who, I'm glad to note, also get their names on the final credits.

An original, memorable film exploring a family feud between two farming brothers; finely balanced tragi-comic tale, beautifully observed & brilliantly played out. A fine original soundtrack too while some of the best moments are purely visual. A real treat.

I think you need to re-classify this film Cinema Paradiso. Comedy definitely does not describe it in any way. It was grim!