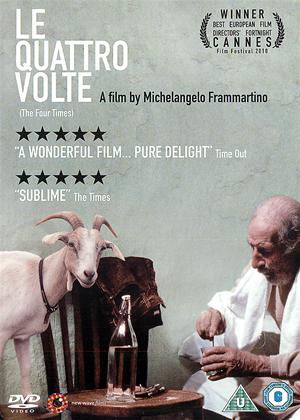 Synopsis:
The film that took last year's Cannes by surprise. Le Quattro Volte explores the cycles of life in a wordless portrait of a Calabrian village that progresses through life-forms from man to animals (goats and a star turn from a dog) to a tree. It works both as a simple celebration of nature and as an exploration of our place in the world, and an extraordinary piece of pure and often very funny cinema.
Actors:
Giuseppe Fuda, Bruno Timpano, Nazareno Timpano, Artemio Vallone, Domenico Cavallo, Santo Cavallo, Peppe Cavallo, Isidoro Chiera, Iolanda Manno, Cesare Ritorito
Directors:
Michelangelo Frammartino
Writers:
Michelangelo Frammartino
Aka:
Le quattro volte
Studio:
New Wave Films
Genres:
Drama
Countries:
Italy, Drama

Reviews (3) of The Four Times

In a genre all its own. - The Four Times review by SB

A truly remarkable and inspiring movie in a genre all its own.

It has a similar feel to "The the story of the Weeping Camel" but more profound, quirky and skilled. The interview with the director reveals just how much effort and patience when into capturing all the natural scenes needed to tell his story about the cycles of life and reincarnation.

The star turn from the dog is a real gem of a scene and shows that Michelangelo Frammartino is truly talented artist. It is not surprising it won at Cannes.

So ingenious it left me wanting to watch it again and again.

a touch of another world - The Four Times review by hp

a mouthful of earth and roots: this is cinema of a walk across beautiful open country side on a challenging day - it's not pizza hut.

Apart from finding the hacking cough of the old goat herder irritating, I was really enjoying this film until the unnecessary death of a baby goat. Although he would have lost a very small part of the film, the cameraman could easily have saved this animal from the elements. I was disgusted and could watch no more of the film

The Four Times is an Italian film that premiered at Cannes last year; it would inaccurate to call it an Italian language movie for several reasons, the first and most obvious because there is no Italian spoken in the movie. The Four Times is altogether speechless and predominantly silent. Further than that to call The Four Times a movie is neither accurate nor fair, as it stands it is more a piece of visual art than a narrative story with characters and editing ploys as we would expect.

The movie simply takes a look at a quiet rural Italian village populated by goat herders, with a noticeable and refreshing absence of almost any modern technology. It is told in four segments, hence its Italian title “Le Quattro Volte”, and shows the perfect and circular nature of nature itself.

Throughout the runtime the seasons change, people die and goats are born and the world continues to turn, both gentle and relentless.

At the close of the film you can not help but feel moved by the beauty of what you have just witnessed, whilst also feeling massively insignificant and hugely over indulgent. The Four Times seems to highlight the colossal and detrimental effect of capitalism and globalization without once mentioning it outright and for the modern Western viewer that becomes almost a little goading. Yet the beauty of the natural and quiet world and timeless traditions of the small community presented before you also demonstrate the over whelming power of nature and humanity.

This is a peaceful, humble and over all beautiful piece of art.