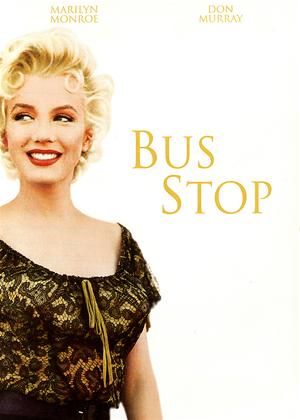 Move Along There - Bus Stop review by CH

“Opening out.” How often the phrase is used to describe the way in which a play becomes a full-blown film. One thinks, perhaps, of a half-hour play by Noel Coward transcending that railway-platform café to emerge on screen as Brief Encounter. Has there, though, been so dramatic a transformation as the leap from the confines of a diner which was William Inge's play Bus Stop to a Cinemascope film which included a protracted, open-air scene at a much-bucking rodeo for which there would certainly have been no room in that original halt somewhere in the wilds of Montana?

The difference is that the wide-screen film contains Marilyn Monroe who, like Sally Bowles in Cabaret, cuts a wow (“That Old Black Magic”) on a hick stage that would have been an international sensation in real life. The thrust of all this is that naïve cowboy Don Murray, no woman having passed through his arms, becomes in thrall to her, so much so that he cannot grasp that she has her eyes on Hollywood rather than getting on the 'bus with him and being taken back to the farm.

Preposterous as the film is, often feeling longer than its ninety minutes, and outlandish as Marilyn's accent sounds, there is so much to engage one's attention - her instinctive grasp of comedy and sharp retort - that one can suspend disbelief now and then.

And, one might surmise that the children with whom Marilyn banters in that snowbound diner are probably still with us – and, even now, reminiscing about her instinctive way with them.