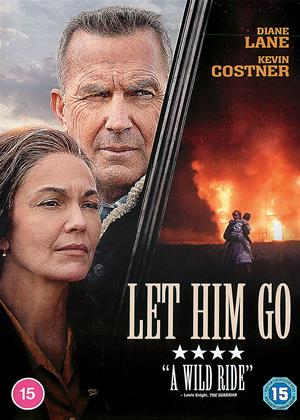 In 1961, in Montana, George Blackledge (Kevin Costner), a retired sheriff, lives with his wife Margaret (Diane Lane), their son, their daughter-in-law, and the couple's baby. The movie starts off as a sentimental drama, and develops into a thriller. It has been described as 'a neo-Western film'. The plot is interesting because the characters are, and the acting is excellent. More particularly, K Costner's on-screen presence is compelling. As for D Lane, she is simply remarkable in the way she acts her part. She is no longer young, but there is a radiant beauty to her. Also, her face is very expressive, and she always strikes the right note in every situation. Neither character speaks that much, but we get to understand their feelings and emotions effortlessly. All the other characters are also highly convincing.

The movie feels very real, even though the story is hardly ordinary, in the way that it unfolds. The central characters are developed in terms of their expectations, their attitudes, their behaviour... The atmosphere of provincial, rural America in the early 1960s is reconstituted very well. The tension is never far from the surface, sustaining our interest right through the film. Overall, in the register that the film has chosen, it works extremely well. There is something profoundly honest about the characters played by K Costner and D Lane, and their on-screen couple seems close and convincing: they look like a real-life couple, as they interact.

An excellent film, which I would recommend; I suspect it may become a classic of the genre. My only reservation would be the title, which is not very good, although it does relate closely to the storyline. The title is bland and a bit daft: it does not do justice to the high quality of the movie.

Good film but some gory bits! - Let Him Go review by giantrolo

Overall, we really enjoyed this film! It was beautifully told and beautifully acted. There were some pretty gory bits in it, though - that Weboy clan is monstrous! Definitely recommended!

I really enjoyed this movie and had read other reviews recommending and praising it. There was, some ‘hairy’ moments, even I looked away. It felt very real and the characters, especially Kevin Costner (George Blackledge) and his wife Diane Lane (Margaret Blackledge) were superb. You believe them to be a normal, ordinary couple. And there is not a lot of dialogue between them or throughout the film, and what is not said is just as important. The tension really builds in parts and you dread, or think what will happen.

The movie certainly kept me gripped, a normal story about a couple who are hit by tragedy. Then the movie unfolds at a steady pace. The cinematography and ‘60s western feel lend itself to its authenticity and richness of the story. I would recommend.

Dances with Yokels - Let Him Go review by TE

'Let Him Go' promises plenty but in the end it proves to be something of an unresolved mix between gritty family drama and gung-ho violence.

The build-up is slow and carefully paced, sustained by a solid performance from Diane Lane. If her performance is 'solid', Kevin Costner is more 'stolid'. Looking heavy in face and body, Costner never seems to get out of second gear from start to finish.

The film sets out to be a realistic portrayal of a family crisis and the emotional abuse of a child, but in the final third all parties suddenly start taking ludicrously unrealistic decisions.

It ends up looking like a rejected episode of the 'Fargo' series: civilised people versus the backwoods crazies (who are led by Lesley Manville in a curious departure from her usual roles). The 'Fargo' effect is completed by the presence of Jeffrey Donovan among the villains, delivering his trademark loony grin psycho performance.

This is a well-acted thriller that gradually winds up the tension until it explodes into strong violence. Kevin Costner, frequently underrated, gives a great performance as does Diane Lane, as a retired couple wanting to reclaim their grandson. An almost unrecognisable Lesley Manville gives a star turn as a psychopathic matriarch. Recommended.

This is a real slow burn that builds into a shocking climax. Kevin Costner and Diane Lane (both excellent) search North Dakota for their young grandson. The scenery’s fine but they move slow and talk slow to plinky-plonk piano music. It can get a tad wearisome, but if you stick with it you may find yourself getting drawn into the cosy home-on-the-range vibe and becoming increasingly concerned for them. Their meetings with the throwbacks that have their grandson crackle with tension and prefigure a brutal and exciting climax that carries a real emotional punch.

Is it family drama? Gothic western? Redemptive thriller? Maybe all of these. Worth a look to find out. As usual, the trailer gives away the ending so avoid if possible.

A film that starts as a 1960s set family drama that accelerates into a hard edged thriller. A story of a tragedy where happily married couple Margaret (Diane Lane) and George (Kevin Costner), a retired lawman, live contentedly on their Montana ranch. Their son, his wife and their baby boy live with them until one day the son dies in a riding accident. After a couple of years their daughter in law, Lorna (Kayli Carter), remarries and her new husband, Donnie (Will Brittain), a morose, ill tempered man, decides to take his new family away. Distraught that she might never see her grandson again Margaret persuades George they should go and find where they are. Eventually they track them down and find they are living with Donnie's mother, Blanche (Lesley Manville) and her other sons. Blanche is the matriarch presiding over a family of very unpleasant men and Margaret quickly realises she needs to get Lorna and the boy away from them but Blanche won't let them go. Lane is the centre of this story, a woman who is stoically determined to get her grandson away from the obvious harm he is suffering under the evil of Blanche and here is the film's great contrast of characters, Manville clearly relishes the role of Blanche and the film wisely keeps her onscreen appearances to a minimum making her all the more an impactive evil character. You know that the confrontation is on the way from the moment these two women meet and when it comes it doesn't disappoint. So there's some good action to be enjoyed in the climax of the story. An entertaining film, the time and setting beautifully portrayed in what is a character driven film, wonderfully performed, and blending family drama with violent retribution. Well worth checking out.