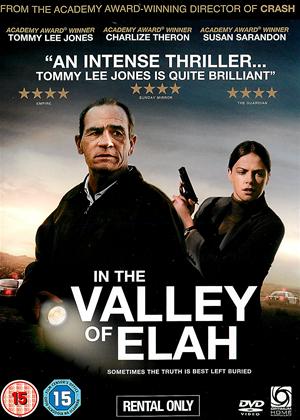 Rent other films like In the Valley of Elah

Reviews (3) of In the Valley of Elah

What can I say other than dull, dull, dull. Kept nodding off to sleep while I waited for the (very) long winded plot to go somewhere.

Best described as an 'art house' or 'indie' film, this is NOT the film for a Friday/Saturday night in (or any night in, for that matter). The plot was, in my opinion, paper thin and the film dragged out to compensate for any real plot. I also felt that, quite frankly, I didn't give two hoots about any character as you were never given a chance to connect with any one of them. Hank's son was portrayed as a abusive US soldier so, quite frankly, who cares that he was murdered?

Susan Sarandon disgracefully underused and Tommy Lee Jones didn't quite cut it as the lead character. Charlize Theron's character, Emily, was pretty poor and there was a pathetic attempt at a sub-plot which was in actual fact, pointless.

In my opinion, a very boring film and I am still grudging the fact that 2 hours have gone from my life that I will never be able to get back!

Home truths - In the Valley of Elah review by CP Customer

We've seen many US military courtroom dramas over the years, yet In The Valley Of Elah is refreshing by avoiding such a drab environment. Instead we follow a determined father as he tries to piece together recent events. Tommy Lee Jones is perfectly cast as the stubborn Hank, with Charlize Theron a surprising foil. At times, In The Valley Of Elah feels as it has been shoehorned to fit into the stream of Iraqi influenced films of late. We glimpse the horrors of serving in the country and what physical and mental scars they can inflict on both sides. Clearly the military police are not as thorough or well-versed in finding missing persons compared to native police departments, but luckily Hank knows what questions to ask.

Interesting film - In the Valley of Elah review by BY

We thought this was quite an interesting film. But you can't help feeling sorry for Hank (Tommy Lee Jones) who, on investigating his son's disappearance finds out the son was actually a cruel, abusive US soldier. Full of a few twists and the usual military cover-up. The cop is well portrayed who helps Hank out with the investigating. A little too long though, it might have been better if the film had been about 20 mins shorter but, still interesting to watch.