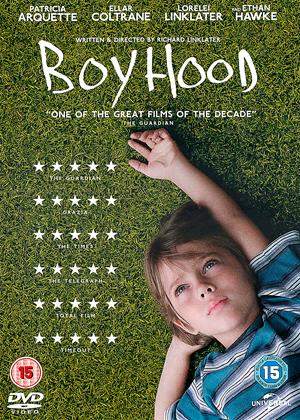 An ambitious film made over twelve years, featuring Ellar Coltrane, who grows up before our eyes from infant school to university. The cast (featuring Linklater regular Ethan Hawke, who is excellent) is on hand for the whole journey. No gimmick this, but a unique, detailed and poignant portrayal of childhood, its joys and its threats.

The main pleasure of the film is watching people change. Good acting, very good soundtrack and hats off to the cast for staying with it over 12 years but not a very riveting storyline. Somewhat disappointed.

Been done before by BBC. Over longer period. - Boyhood review by NC

Bit kitchen sink America. Appreciate has been 12 years in making, and the continuity with the performers is quite a clever exercise. Over that period would have expected some calamity to befall someone.

Training day guy was very consistent, in fact could have been in the same film. When the downhome Americans get their stash of guns out to play on the lawn, as they seem to do, was half expecting Denzel to appear!

With each jump forward in time there is a moment of readjustment as the actors often have changed quite considerably both physically and psychologically. These moments are the best part of this diary of childhood. The plot is all about normal growing up and therefore not that dramatic. The acting is better than I expected but not great, it is all a bit thrown together depending too much on the journey through time theme.

Beyond dull and what little plot this film has is just miserable. How can anyone enjoy watching such sad individuals do nothing with their lives?

Too long - Boyhood review by IL

After reading the reviews I was looking forward to this film, but for me personally it was like watching paint dry. I'll admit the acting was good,but the film was far too long and not that interesting.

I enjoyed this film, good story and great acting. Some will find the film slow as its a story of a 8 year old lad growing up through school and college over 12 years . The clever part is that it was filmed over 12years with the same cast as they grew older.

A deserved Oscar winner - Boyhood review by BE

Richard Linklater has surpassed himself with this one. The best thing to come out of America in years. It's superb and plays for 2hrs 40mins. My only reservation, as usual, is the sloppy American diction. I put the subtitles on but quite distracting as displayed all over the screen! Nevertheless, a brilliant movie.

This ought to have won the Oscars for best Film and Director, sadly they had to settle for BAFTAS. Filmed over nine years, the film starts with the main character a nine year old boy and ends with him as a young man newly arrived at College. As the years pass, we watch his relationships with his Father, sister and not least his Mother's journey through disastrous relationships to professional independence. Friends, teachers and girlfriends come and go, and as the years go we see slice of life itself.

Never dull, often inspiring and sometimes moving, this is ambitious film making at its best.

An interesting but gimmicky movie with a great 1st hour; then it lags + wallows in US psychobabble - Boyhood review by PV

This movie is selling itself on a gimmick - the fact it was filmed over 12 years with the same cast - which, if nothing else, is a logistical nightmare! It should definitely win an Oscar for best gimmick of the year - but no other one.

The film itself is OK, but nothing more. It could have been made with different actors playing the child and adult character, of course. It would not have received so much attention then, however.

The first hour is great - when the boy is 8 years old and more.

When adolescence hits the whole thing goes downhill, betting bogged down in typical American psychobabble and waffling about feelings. Moreover, I did not believe for a minute the journey of some of the characters - esp the mum who goes from uneducated dimwit to professor genius in 5 years; and I really don't believe in what happens to her university professor teacher, a silverback smoothie. The plot points are calculated to elicit sympathy for the mother and boy and his sister. But instead of that, they had me groaning - plus they actually made the movie a bit misandrist.

Enjoy the first hour. But don't expect too much from the rest.

Great music though - so well done to whoever sorted the soundtrack.

3 stars for an average movie.

Searching for the meaning of life - Boyhood review by CA

We see life through the eyes of a boy who is growing up in an averagely dysfunctional American family, feeling he has no control over the big decisions which get made around him, sometimes happy, sometimes not. I found it very moving at times that this family group seemed to grow up or grow older before our eyes, with the same actors being used over a long period of time.

I was relieved that the ending was upbeat, I found it a rich and sensitive film.

Richard Linklater brings us Boyhood, the film that took twelve years to make, and three hours to tell. Linklater and his cast and crew managed to keep their project secret for many years, and it wasn’t until the film was nearing completion that they announced their creative and unique feat. The film industry flipped. While it is new and exciting, unfortunately, that’s all that is drawing a crowd, and the ‘story’ element suffers.

The film focuses on Mason (Ellar Coltrane). He is a typical American kid - even having blonde hair and blue eyes - and this is the story of his years from five to eighteen. He and his family unite and struggle through breakups, birthdays, good times and bad times. Mason literally grows before our eyes, and we are reminded of our own childhood in the process. To ‘landmark’ the years, Linklater makes many references - such as the Harry Potter phenomenon. This connection to real-life further grounds the film, and connects our experiences to those of the characters.

Boyhood was written and directed by Richard Linklater, who once again plays with the element of time. His past works have predominately been set within the span of one day, though still meander without much plot, with the character’s development driving the action. Special assurances also had to be made to ensure that in the event Linklater died during the twelve years of production, Ethan Hawke (Mason’s father and past collaborator with the creator) would take-over the directing responsibility.

All of the performances were beautiful - both from lead and secondary characters - and it’s amazing to think that their entire progress was created so many years ago. For such young actors (Mason’s sister is even played by Linklater’s new-comer daughter, Lorelei) to understand and portray their characters so well for so long, shows they have what it takes to have bright film careers.

With the art of filmmaking changing throughout the years, Linklater had to find and maintain his style for the whole duration of the production. The camera remains quite static, with quick cuts to the speakers. This gives it less of a film-feel, and more like a documentary. The action and dialogue also feel less strict, and don’t seem to follow a script, being so realistic in nature.

The film has had its ups and downs with critics and audiences, going from 1-out-of-10 ratings, to 10-out-of-10 ratings and winning awards. For the most part, Boyhood is commended for its unique process, while others can’t help but look past that to the obvious lack of story and therefore find the 3 hour run-time too much to bear.

There seems to be no middle-ground with opinions on this film, you either love it, or you hate it. While it’s true it could have had more of a story, I appreciate a filmmaker trying something new, instead of remaking an old product. Either way, it is going to be talked about for many years to come.