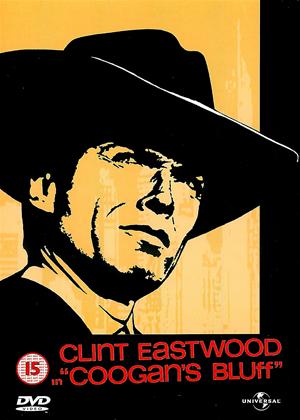 Brings back period memories - I like it! - Coogan's Bluff review by RP

'Coogan's Bluff' is a film that marks the transition between Clint Eastwood's western roles and his cop role as 'Dirty Harry'. In fact, it combines both of them as he plays a young Arizona deputy sheriff sent to New York to collect a prisoner - he's at home in the Arizona deserts, but like a fish out of water in 1960s New York, with its hippies, drug culture and - to him - far too little emphasis on getting the job done.

Finding the prisoner in hospital after an LSD overdose, impatient Clint springs him but loses him, and the rest of the film is spent tracking him down in the alien world of New York, culminating in a motorcycle chase around The Cloisters in Fort Tryon Park.

I like it - it's most definitely of its time and has a period feel to it, a period now lone gone - perhaps enhanced by the view from some 45 years on. Just a few: hippies, the song 'Pigeon Toed Orange Peel', the dancing in the nightclub with body-painted characters, a lesbian kiss (in 1968!), the projection on the screen in the club, including a clip from 'Tarantula', the 1955 sci-fi film in which Clint has an uncredited role as the squadron leader on the final napalm attack on the creature, the motorcycle chase using Triumph bikes, the helipad on the Pan Am building (Pan Am went bankrupt in 1991 and the building is now the MetLife building) and the New York Airways helicopters (New York Airways is now defunct, and the helipad closed after an accident in 1977).

The DVD is pretty grainy and has been cut from the cinema version leading to jumps in continuity, most notably where Clint is (apparently) never given any assignment but cuts straight from Arizona to his helicopter flight into New York. But these are minor quibbles...

I like it. It's a pretty average film but I'll give it a bonus for the period memories it brings. 4/5 stars.

Avoid unless you are a fan - Coogan's Bluff review by DB

Not one of Client Eastwood's best or Don Siegal. Other than a couple of exterior shots in Arizona ( maybe ) and New York it's all filmed indoors on sets that look like they might have been borrowed from a TV cop show of the time. Lots of casual stereotypes around and while we may like to remember the music of the sixties with justified affection it also produced a lot of rubbish , like the stuff here. Surely a song called 'Pigeon Toed Orange Peel' could only have been conceived and enjoyed while high as a kite.