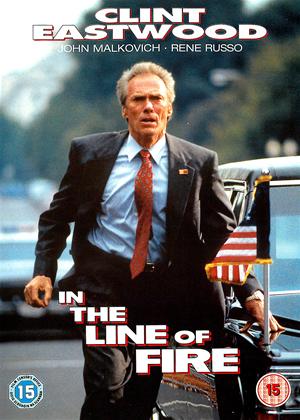 Synopsis:
Frank Horrigan (Clint Eastwood) is a tough, veteran Secret Service agent who has been plagued by feeling s of guilt and failure since the assassination of John F. Kennedy. As the agent on duty that fatal day, Horrigan feels that he should have reacted more quickly and taken the bullet for the President. Thirty years later, the current President of the United States is entering a re-election campaign, and following a number of death threats, Horrigan has been called in to assist in what should be a routine research operation.
However, when he discovers that a professional assassin and master of disguise (John Malkovich) has been tracking the President, the assignment turns into a deadly game of cat and mouse. Leary uses his knowledge of the events in 1963 to mentally torture Horrigan in the ensuing psychological duel - a duel that will eventually put Horrigan 'In the Line of Fire'...
Actors:
Clint Eastwood, John Malkovich, Rene Russo, Dylan McDermott, Gary Cole, Fred Dalton Thompson, John Mahoney, Gregory Alan Williams, Jim Curley, Sally Hughes, Clyde Kusatsu, Steve Hytner, Tobin Bell, Bob Schott, Juan A. Riojas, Elsa Raven, Arthur Senzy, Patrika Darbo, Mary Van Arsdel, Ryan Cutrona
Directors:
Wolfgang Petersen
Writers:
Jeff Maguire
Others:
Anne V. Coates
Studio:
Columbia Tristar
Genres:
Action & Adventure, Thrillers

Rent other films like In the Line of Fire

Reviews (3) of In the Line of Fire

What puts this film above all the other "save the president and get the girl" is Clint, John and possibly some good directing too. Malkovich's disguises are a strange brand of humour but most of the film is a tightly orchestrated assassination attempt. Don't be put off that it was made in 1993. It is better for it.

Secret Service Agent Frank Horrigan (Clint Eastwood) and his partner investigate a psychopathic killer (John Malkovich) who has warned them that he is going to murder the president of the USA. On the basis of this somewhat conventional storyline, the movie succeeds in creating a fast-paced, suspenseful political thriller that is generally plausible, amazingly enough. (I found the romance involving F Horrigan the least plausible part of the story, I must say!)

The film is interesting because it becomes a fight to the death between the 2 men (C Eastwood and J Malkovich), each one with his own demons, and this is brought about in an intelligent way. As far as this type of movie goes, this is the best you are going to get, and it is well-worth watching.

Despite the clichés, this is excellent - In the Line of Fire review by RP

Yes, it's another 'assassinate the President' film - but a very good one.

It's clichéd of course - mad-as-a-box-of-frogs loner ex-agent uses his disguise skills to get close to the Pres and only Clint Eastwood can save him. Save him he does, and (of course) gets the girl.

So why is this different from so many other similar films? Well, it's got Clint - and here he's actually playing an older man (albeit younger than Clint), not just pretending to be young - and it works very well in his part of a veteran agent who failed to protect JFK and doesn't intend to fail again. It's got John Malkovich who makes an excellent baddy. But most of all it's the tight direction that makes it work - and that's down to Wolfgang Petersen. He is perhaps best known for directing 'Das Boot' - if you've not seen it, do!

Most of Clint's later films he directed himself and produced via his own production company. The previous year he directed and starred in the Oscar winning 'Unforgiven', so this must have had something about it to attract him - it has, it's great and was nominated for 3 Oscars and 3 BAFTAs. It deserved to win awards, but somehow failed.

Despite the clichés, this is excellent. 5/5 stars - highly recommended.