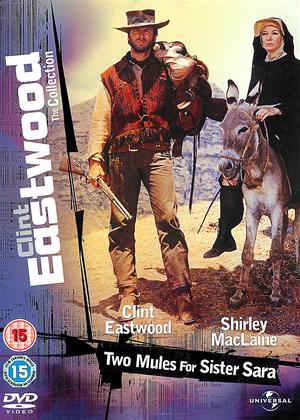 Rent other films like Two Mules for Sister Sara

Not unlikeable and with some mildly humorous moments, but predictable and slow moving - Two Mules for Sister Sara review by RP

Directed by veteran Don Siegel who had already directed Clint Eastwood in 'Coogan's Bluff' and went on to direct him in 'The Beguiled', 'Dirty Harry' and 'Escape from Alcatraz' this is one of Clint's later Westerns as he transitioned from that genre into cop roles.

The two stars are Clint (looking and acting very like his characters in his earlier spaghetti Westerns) and Shirley MacLaine as the 'Sister Sara' of the title - and the contrast couldn't be greater. Although he is one of my favourite actors and directors, Clint's acting skills consist largely of playing Clint Eastwood with narrowed eyes and a curl of his lips. Shirley MacLaine however is a 'proper' actress and compared to Clint's limited range it most definitely shows.

If you're a Clint fan, then this film is worth watching - but frankly, it's a pretty weak effort with a weak script and predictable storyline. It tries to capture the look and feel of those earlier spaghetti Westerns, even down to the Ennio Morricone score, but it's a US film shot in Mexico - and the landscape photography is one of the best things about it. It also abounds with anachronisms ranging from the date of the French involvement in Mexico, the weapons, the invention of dynamite, the celebration of Bastille Day, Shirley MacLaine's eye make-up - the list goes on.

The film title itself is a sort of pun - Sara has two animals, a mule and later a burro. The 'second mule' is of course Clint's character...

Yes, there are some mildly humorous moments, but overall it's pretty slow moving, predictable, very average stuff. I'd be tempted to rate it at 2/5 stars but I do like both Clint and Shirley MacLaine so I'll give it an over-generous 3/5 stars.