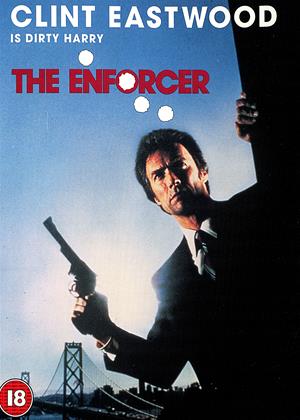 Reviews (1) of The Enforcer

This is the third of the 'Dirty Harry' series of films, made 5 years after the original. Clint plays Clint playing 'Dirty' Harry Callahan, this time with rookie cop Tyne Daly tagging along. Ms Daly went on to play a cop in the long running TV series 'Cagney and Lacey', so perhaps her experience here wasn't wasted.

By now, the storyline of the 'Dirty Harry' films was becoming fairly hackneyed and this is no exception: Clint plays the hard-nosed cop, says the customary one-liners, shows his customary disrespect for authority, and single-handedly foils a dastardly plot, shooting many baddies in the process.

The plot is more than a little silly: urban revolutionaries arm themselves with LARS shoulder-mounted rocket launchers and submachine guns, kidnap the mayor and hold him to ransom with a climax on Alcatraz Island. Clint survives; the baddies perish; authority is made to look foolish. Err, that's it.

It's a great romp, but if this is routine police work and what life on the streets in California is like then I'm a banana. If you want to see the grim reality of drug-fuelled crime and the over-use of guns, then watch 'Training Day'. Clearly that doesn't show what the typical rookie has to undergo, but the dangerous environment of the streets is vividly portrayed. Let's just say that it doesn't involve urban revolutionary terrorists...